The decision was made during an emergency meeting held at Mara headquarters in Kuala Lumpur on Tuesday morning.

Dr Yusof will assume all the positions held by Annuar.

When contacted, Annuar said he accepted the decision but refused to elaborate as he had just been informed of the matter.

"I don't know the details. I just received the phone call from Dr Yusof. I have nothing to say," he said when asked if he knew the reasons behind the suspension.

Annuar, who is Ketereh MP and Umno information chief, said he was on "official duties" in New Zealand.

On the sports front, Annuar stepped down as the Kelantan Football Association (Kafa) president on Nov 8 last year after holding the post since 2007.

During his tenure, the Red Warriors' won six trophies, including the treble (Malaysia Cup, Super League and FA Cup) in 2012.

Kafa had said it intended to withdraw from the 2017 Malaysian Super League due to financial constraints.

Besides the sponsorship issue, Kafa is also without a president to succeed Annuar following his resignation.

Recently, Annuar was criticised by Johor crown prince Tunku Ismail Sultan Ibrahim who alleged that a certain "Tan Sri" had forced Mara and its entities to sponsor Kafa.

Annuar: I had no idea about meeting that suspended me 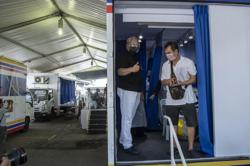