GEORGE TOWN: Days before Chinese New Year, some 500 resident tortoises at the Kek Lok Si Temple have been moved to a new home – the Oriental Garden at the foothill of the temple.

The landscaped area with a cascading waterfall that forms part of the pond, provides a bigger and more natural setting for the reptiles.

Temple abbot Ven Xian Guan said the tortoise pond would be open to the public today, in time for the festive celebration. It is open from 8.45am till 6pm daily.

He said they spent a day transporting the tortoises by lorry from the previous site.

“Outside food is not allowed to be fed to the tortoises here for hygienic reasons. Those who want to can buy kangkung from us.

“We also discourage the public from releasing tortoises or fishes into the new pond.

The temple had previously come under fire by several animal loving non-governmental organisations for the tortoises’ poor living conditions in the pond.

The new site provides a clean and refreshing feel for visitors standing at the gazebos and mini bridges, while the water in the pond is light-jade-green in colour. 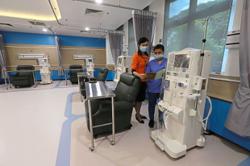