ALOR SETAR: The Langkawi Chinese Chamber of Commerce wants the Government to put on hold a new ruling by the Customs Department which requires duty-free shop operators to deposit a bank guarantee for cigarette and liquor stocks in their premises.

“Not all the operators can afford to pay the amount ranging from RM250,000 to RM1.5mil, depending on the liquor and cigarette stocks in their business premises in a short period of time.

“The operators are upset about the new ruling,” he told a press conference at a hotel here yesterday.

Chen, who is also Langkawi MCA division chairman, hoped the Government would work out a win-win solution.

Under the new ruling, he said the shop operators are also required to pay a bank guarantee of between RM900,000 and RM1mil to the Customs Depart-ment for warehouses they own to keep their liquor and cigarette stocks.

“This could force warehouse owners to relocate to another country,” he said.

Chen said another unfair ruling was the restriction on the purchase of duty-free liquor and cigarettes by tourists to two Privileged Customs Areas (PCAs) at the Jetty Point and at the Langkawi International Airport when leaving the island.

“We have 56 licensed duty-free shops in Langkawi. So, why are tourists only allowed to buy cigarettes, liquor and beer only from these two outlets?

“This will create a business monopoly and kill the business of the other outlets. Many will close shop and locals will end up losing their jobs,” he added.

“We were told that the matter would be brought up at the Cabinet meeting,” he said.

He also questioned the purpose of introducing direct flights from Phuket, Bali and Guangzhou to the island if there were so many restrictions on tourists.

In July, it was reported that the authorities would impose controls to tighten the supply chain and distribution of contraband liquor and tobacco in the country’s three duty-free islands.

The islands are Pulau Langkawi, Pulau Tioman and Labuan.

The Government, in its recalibrated Budget 2016, had said that it would restructure liquor and cigarette-selling channels and limit them to duty-free outlets licensed by the Royal Malaysian Customs Department. 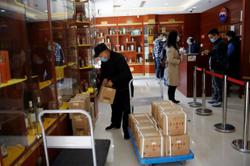