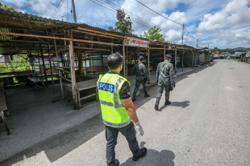 A truck full of logs makes its way out of the forest, down the road away from a logging blockade.

GUA MUSANG: The forest is Kelantan’s biggest source of income.

In November last year, the state estimated a revenue of RM539.8mil in its 2016 budget.

Of this, “forest revenue is the biggest contributor with a total of RM172.96mil, or 29.12% of the entire revenue,” said Kelantan Mentri Besar Datuk Ahmad Yakob at the time.

He said that of this, proceeds from timber came up to RM30mil, with the rest coming from other payments including forestry premiums.

The Peninsular Malaysia Forestry Department’s 2015 annual report shows that Kelantan has 3,331 workers in timber industries in the state.

It recorded 887,666 cubic metres in log production that year, second only to Pahang.

As one of the nation’s poorest states, the importance of revenue from forest products for Kelantan cannot be exaggerated.

The Malaysian Timber Industry Board website showed that a tonne of logs can fetch anywhere from RM900 to RM4,000, depending on the type.

In a press conference earlier this month, Kelantan Logging Association president Lim Boon Kiak said the logging in the Balah Reserve was legal but 15 logging companies were facing a loss of nearly RM50mil because of the ongoing blockade by the Temiar.

Neither the state Forestry Department nor the Orang Asli Affairs Department could be reached for comment.

At 56,010ha, the Balah forest is one of Kelantan’s biggest reserves, more than twice the size of Kuala Lumpur. More than 80% (or 47,301ha) of it is zoned as a production forest, meaning it can be logged, as and when the state says so.

It’s not known which parts of it are home to the Temiar. But Jefri Berkut, one of the men at the blockade, said there were about 39 villages of various sizes, with a total population of perhaps 2,000.

Deputy Mentri Besar Datuk Mohd Amar Abdullah, while acknowledging there was some potential damage to the environment, has said he didn’t think the pollution was very severe.

However, Kelantan has since issued a stop-work order to two logging companies in the area.

It remains to be seen how far the state government is willing to bend to the Temiar’s demands.