By VICTORIA BROWN and IAN YEE PETALING JAYA: Lawmakers and celebrities have been coming out strongly in support of #MPsAgainstPredators, R.AGE’s latest initiative to combat the alarming trend of child sexual grooming in Malaysia.

A website for the initiative (predator.my) was launched on Friday, allowing Malaysians to send social media messages to their MPs, asking them to push for new laws against child sexual grooming when the Dewan Rakyat meets from tomorrow.

The website also contains an interactive map of all the MPs’ constituencies, which will turn from grey to green once the MP publicly supports the initiative with a social media post containing the hashtag “#MPsAgainstPredators”.

Rembau MP and Youth and Sports Minister Khairy Jamaluddin was one of the first to support the campaign with a photo on Twitter, which was retweeted over 1,000 times in less than a day.

His post was quickly followed by one from Batang Sadong MP and Minister in the Prime Minister’s Department Datuk Nancy Shukri, and another by Hulu Selangor MP Datuk P. Kamalanathan.

“I am excited to see the young team at R.AGE make a stand against the sexual abuse of children and minors,” said Dr Wee.

“The Government has already responded by setting up the sexual crimes task force, which has promptly drafted new policies and laws to protect children from sexual crimes.

“I hope all my fellow Members of Parliament will support (the Bill) when it is tabled in Parliament.”

The R.AGE team has spent over 10 months investigating online child sex predators in Malaysia for its Predator in My Phone campaign and documentary series, which has now been viewed over 1.6 million times.

“The public needs to be outraged (by child sexual grooming). Our ultimate aim here is child protection.

“And for that, there needs to be some laws, some punitive measures,” said Marina, who also reiterated her call for public sex education.

The Predator in My Phone campaign was given a dash of star power during the launch of the #MPsAgainstPredators website on Friday.

Lisa, Lim, Tan, Marina and Syed Azmi all took part in a massive live stream event on the Predator in My Phone Facebook page (fb.com/ragepmp).

The live streams took place throughout the day, culminating with a 30-minute live show with campaign ambassador Lisa, who launched the new www.predator.my website.

A series of PSAs featuring the stars were premiered during the live streams, showing the stars reading out actual chat messages from child sexual groomers.

Throughout the coming week, a whole host of other famous personalities will be appearing live on the Predator Facebook page to support the initiative. Like the page at fb.com/ragepmp to watch the videos. 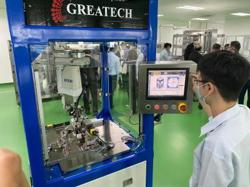