GUA MUSANG: The Temiar tribe first attracted the country’s attention in August last year when seven orang asli pupils fled into the forest to escape punishment for swimming in a river without permission.

The entire community mounted a search for them. Some 45 days later, two of them were found by search and rescue personnel and brought out to safety, but the others did not make it.

Now, interest in their well-being has been rekindled with the staging of a blockade to stop loggers from transporting logs out of what they claim is their ancestral land.

Since last week, about 200 villagers mounted the blockade, resulting in a deadlock between both parties.

“We have given up being nice and getting pushed around all the time. This time, we will make our stand, stick together and are prepared for the worse,” said the group’s spokesman Limit Lias.

He said they named the blockade area “Kampung Blockade”, situated about 70km from here, in the Balah forest reserve.

Men and women were seen mingling around, treating the new “village” as their home. A special makeshift booth was erected for visitors to sign in before entering.

The villagers kept a close watch on all strangers, even pressmen, with some getting ready to take pictures and videos of outsiders.

About 10km from the blockade site lies a log collection area. One of the tribe leaders , Azmi Badol, said they had stopped three lorries laden with logs from leaving the area.

Azmi said they would only negotiate with the Kelantan state government.

“It will be good if the mentri besar visited our area to see the devastation for himself. We can no longer tolerate this.

“We demand a stop-work order be issued immediately and a panel to assess the damage,” he said.

Azmi also said that all of them were prepared to be arrested by the police.

He said there were at least 2,000 villagers in Pos Gob, Pos Simpor and Pos Pasik, and the majority of them depended on the forest to eke out a living.

Limit said lorries with logs would be not be allowed out of the blockade site but loggers could move out their heavy machineries.

“We are serious about this and will monitor the situation from morning to night,” he said, adding that they were prepared to eat just ubi kayu (cassava) to protect the site.

“We have nothing to fear. We are not militants or an aggressive tribe but are here to protect our rights in a peaceful manner.” 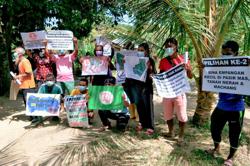