‘Train to Busan’ speeds away to box-office record

PETALING JAYA: Malaysians are still enthusiastically boarding the Train to Busan, some two weeks after it hit local cinemas.

As of Sept 21, the zombie flick, which started screening in Malaysia on Sept 8, has netted RM20mil in takings, making it the top South Korean film in Malaysia’s box-office history.

Tung Yow Kong, general manager of GSC Movies, which brought Train to Busan to Malaysia, said it had all the elements that appeal to audiences – horror, comedy and emotional scenes.

“When I first watched it, I found it to be good. But I just didn’t expect it to be so popular,” said Tung.

The thriller is set on a bullet train travelling from Seoul to Busan. On board are a variety of characters, including a workaholic and his daughter, a group of young baseball players, a couple expecting their first child and two elderly sisters. And there happens to be a passenger infected by a virus.

Train to Busan, which made its international premiere at the Cannes Film Festival in May, has also smashed box-office records in its home country, Hong Kong and Singapore.

Star2.com reported last month that Hollywood is keen to remake the film, with two major studios in the United States – 20th Century Fox and Sony Pictures – eyeing the project.

Student Khatijah Kamal, a fan of K-dramas, said she was surprised to see “a zombie apocalypse film with so much heart”.

“What I liked was seeing people become heroes and villains within that single train ride,” said Khatijah. 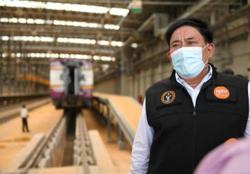