Study claiming 6,500 deaths in Malaysia due to haze refuted An August 2015 file picture of Puchong, Selangor, shrouded in haze.

KUALA LUMPUR: Malaysia has refuted a Harvard and Columbia University study, claiming that the 2015 South-East Asian haze had caused 6,500 deaths in the country.

The study, which is expected to be published in the Environmental Research Letters (ERL) journal, also claims that there have been 100,300 premature deaths in the region from the haze; 91,600 in Indonesia and 2,200 in Singapore.

The numbers vastly contradict the official count, which only reported 19 deaths in Indonesia and none in Malaysia and Singapore.

Deputy Health director-general Datuk Dr S. Jeyaindran was sceptical of the findings of the study.

“No such thing!” he said when contacted Monday about the paper.

“We had no deaths last year directly related to the haze,” he added.

He said the Ministry had done a study on suspended particulate matter in the air from open burning and its effects on the human body, and found that apart from irritable symptoms, no grave health risks were likely.

“Of course we had increased number of conjunctivitis and respiratory track infection but its mostly due to the fact that some haze contained sulpher dioxide and nitric oxide which comes from the burning of fossil fuel,” he said.

The annual haze that originates from Indonesia, usually would blow PM10 or PM5 concentrated particulate matter, which is less than 10 microns and mostly causes irritation.
“We didn’t find any increase in the number of acute respiratory ailments from the haze. This has been going on year on year and our data shows there is no increase,” he Dr Jeyaindran said.
Little is known about the methodology of the study, though Bloomberg reported that the number of deaths was “derived from a complex analysis that has not yet been validated by analysis of official data on mortality”.
An expert team who reviewed the paper for Bloomberg were also reserved in their comments, calling it “preliminary” and “not precise” but said it should serve as a wake up call for the region which saw its worst environmental incident since the 1997 haze.
The fires generated around 600 million tonnes of greenhouse gasses - roughly equivalent to Germany’s entire annual output and economically stripped the three countries involved of US$9bil.
“If nothing changes, this killer haze will carry on taking a terrible toll, year after year. Industry and government must take real action to stop forest clearing and peatland drainage for plantations,” said Greenpeace Indonesia forest campaigner Yuyun Indradi, in response to the study.
Article type: metered
User Type: anonymous web
User Status:
Campaign ID: 46
Cxense type: free
User access status: 3 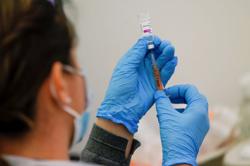