No child left behind

This school at Chow Kit is a beacon of hope for homeless children as it provides them with a free education and three meals a day.

THE Ninth Shift of the Malaysia Education Blueprint 2013-2025 is about fostering the partnership between the school and parents, the community, as well as the private sector, to uplift overall education standards.

In this regard, Sekolah Bimbingan Jalinan Kasih (SBJK) at Kuala Lumpur’s Chow Kit area shines as a beacon of public-private partnership.

The three-year-old school is a fully Government-funded school for stateless or homeless children (including orphans) aged from four to 19-years-old.

“We have 143 students, and 16 teachers,” said principal Zulkernai Fauzi during a media tour of the school on Thursday.

A child can be admitted to SBJK if he or she can demonstrate that at least one guardian, or parent, is Malaysian.

The school follows an Education Ministry approved curriculum, and has recently been visited by Prime Minister Datuk Seri Najib Tun Razak, who pledged RM30mil to redevelop the school that makes use of the building formerly used by the Kuala Lumpur Education Office. Of course, before it was used as the education office, the building once housed the Princess Road Primary School, alma mater of presenter and television host Datuk Aznil Nawawi, who is now the “face” of SBJK after finding out what the school is doing for the less fortunate.

“Two years ago, I was cruising around the area, and decided to pop into my former school. While wal­king around, the principal saw me, and the rest is history,” said Aznil, 54, who is more than happy to do his part for the school by roping in his buddies from the Princess Road School alumni association.

“In the beginning, it was more of providing financial assistance. We took the kids to do Hari Raya shopping. “They had no idea what Hari Raya is, nor shopping,” he added of the students of the school located just at Lorong Haji Hussein 2, off Jalan Raja Muda Abdul Aziz.

Aznil’s (left) chance encounter with Zulkernai (right) led him to lend his fame to help the school that occupies the building that once housed his alma mater known as Princess Road Primary School.

The setting up SBJK was approved by the government in 2011, and the school opened its doors in 2013.

The ministry wants the whole country to know about the school. Specifically, it would like the community surrounding the school to be more involved in the school.

“The role of non-governmental organisations in the school is very important. By and large, larger society still don’t quite know about it,” said Zulkernai.

The Rukun Tetangga chairman for Chow Kit, Danial Abdul Razak, is one of those. “Prior to 2013, the building was vacant for quite a while. And then, we heard the sound of children, but we assumed it was some kind of hostel. We had no idea what was happening in the compound,” he said, adding that a chance encounter with Zulkernai at a wedding function at the end of 2015 helped to clear things up.

“I am quite embarrassed to say, but even Chow Kit folks are not quite aware of the school. I reckon that about 60% of Chow Kit know about the existence of the school. It seems SBJK is more well known among outsiders and those further away,” he added.

NGOs and various foundations and associations have been making a beeline for SBJK as part of their corporate social responsibility undertakings.

“If my face can do good things for the school, then I am more than willing to ‘lend’ it,” shared Aznil, who expressed his surprise when initially finding out about SBJK.

“Subsequently, at one of the functions I attended, I met Tan Sri Mohd Khamil Jamil (then executive chairman of Proton Holdings Bhd). Following discussions, the children of SBJK were able to tour Proton’s facilities,” he said.

Later, DRB-Hicom Bhd also stepped in to offer four slots for the older students to study automotive maintenance and repair at its Akademi SAGA at Shah Alam, which offers hands-on learning system that leads to certificates recognised by the Malaysian automotive industry.

Yayasan Sarana Pendidikan Negara, which has Education Minister Datuk Seri Mahdzir Khalid as patron, is a three-year-old organisation set up to support the government’s aspiration in narrowing the gap between urban and rural students.

“We would like to support the ministry by helping the urban poor through long term programmes that include vocational and entrepreneurship activities. For this unique school, we would even prepare the students for the job market,” said Sarana’s general manager, Noor Aisha Md Tamsi, who added that batik-making lessons will also be given.

Another NGO that is also bent on making entrepreneurs out of the children is Persatuan Wanita Inspirasi Negara. “We bring in motivational speakers and various experts in their fields. The next step is to teach them to use social media to market their handicraft and products,” said founder-president Norhimah Aziz.

Yayasan EMKAY has already poured in a fair amount of resources into the school by helping to furnish it with a toy library. “We aim to provide a fun learning environment so that children will be attracted to the school. We also created a soundproof room so that the children can indulge in music practice, and be as loud as they want to be,” said Zainon Kasim, the foundation’s general manager.

The physical needs of the children are also not forgotten as there are plans for them to be given systematic training is specific sports by working with former national athletes.

“We will be providing archery and netball lessons so that the children can also excel in sports,” said Zuhairi Abdul Manaf, general manager of the Youth and Sports Ministry’s National Athletes’ Welfare Foundation (Yakeb).

“Through our Learn From the Pros programme, we intend to provide access to sports for all by giving an opportunity to the underprivileged to learn from those who excel in their field,” said Zuhairi.

Medical, including dental care for the children are taken care of by a group of doctors from UMMC, together with their counterparts from Universiti Kebangsaan Malaysia and Universiti Putra Malaysia, and members of Yayasan Semesta Berdaftar, a welfare organisation based at Petaling Jaya’s Tun Abdul Aziz mosque.

“The next programme we want to provide is exposure to psychological wellness, so the children are aware what is abuse, and what is not right, including sexuality matters. Over the long term, we also want to look into setting up a food bank in the school, as we found that a lot of food aid is ad hoc. We want to have something more systematic to ensure a steady supply of food at school,” said Dr Haireen Hadi, family medicine specialist at UMMC.

“During our street feeding sessions, we came across many children who should be in school, but weren’t. We would then refer them to the school to ensure they get an education. SBJK’s aim and Kechara’s aim are in harmony. We are happy with this partnership, and would like to continue to support them in getting every child into a school,” he said.

For Zulkernai, few schools can come close to SBJK. “At the moment, it is a small ambassador for the country. The children love coming to school, and are actually sad when there are holidays. This is a unique school that needs various forms of assistance.” 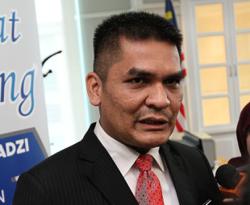