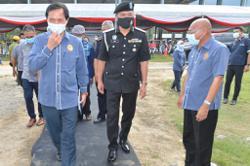 Clear message: A signboard erected at Birch The Plaza Condominium in Datuk Keramat Road, Penang, says it all on the unlicensed homestay.

GEORGE TOWN: The Penang Island City Council (MBPP) has continued its efforts in weeding out illegal and unlicensed lodging houses.

In its recent check by officers the council’s Commissioner of Buildings (COB), as well as two MBPP departments – Licensing Department and Building Department – three unit owners in Birch The Plaza Condominium in Datuk Keramat Road were fined RM250 each for operating a business without licence.

Tanjong MP Ng Wei Aik, who was also present during the checks, said the officers knocked on the doors of the eight units that were believed to be available for short-term rent but only guests from three units answered.

Ng said there were 417 condominium units at Birch The Plaza and it was found that 50 units were involved in the illegal lodging house business.

“Based on all the information given by the management, the MBPP is going to issue 50 notices to the respective owners.

“MBPP issued RM250 compound to each of the three units where we met the guests. This issue has been haunting MBPP the last two years,” he said.

Ng said MBPP issued the summonses under the 1991 MPPP bylaw for Trade, Business and Industries for the offence of operating a business without licence.

“Errant operators who don’t want to cease operations can be taken to court. On conviction, they can be fined a maximum of up to RM2,000, imprisonment of up to one year, or both.

Ng said only serviced apartments are allowed to operate homestays or short stays.

“All residential apartments, condominiums, flats and the gated residential houses are not allowed to carry out these lodging houses business,” he said.