On the halal food trail

KUALA LUMPUR: There is no shortage of good halal food throughout the Asean region and a new TV series has set out to showcase the array of choices available.

The Halal Foodie, a travelogue with a dash of humour, follows the adventures of host and comedian Papi Zak (pic) as he heads to various locations around South-East Asia in search of the best halal food.

Catch Papi Zak injecting his own flavour of humour and lively antics into the colourful show comprising eight episodes, each highlighting a different Asean country, that airs on the GoAsean channel on Astro.

Papi Zak said the show’s focus on halal food was a fresh take on the food-and-travel genre that targeted a previously untapped market.

“You see a lot of food shows and the food looks good, but for the majority of Muslim viewers, they don’t know if it’s halal or not,” the 37-year-old funnyman, whose real name is Mohd Zakry Kamal, said yesterday.

“Papi” is an affectionate moniker, meaning “Daddy”, given by his Mexican colleagues when he was working part-time at a restaurant as a student in the United States.

He recalled how his relatives, when travelling, tended to be very hesitant and concerned about whether they could find halal food.

“But we were surprised to find what we found ... great food in places that you never thought would have Muslim communities.

Some of the most memorable moments for Papi Zak during filming are having spicy nasi padang in Padang, Indonesia, and a special fried fish dish in Siem Reap, Cambodia.

“I think it was a big red snapper and I seriously finished the whole thing, I didn’t even leave enough for the rest of the crew,” he said with a laugh, adding that he gained a lot of weight during filming.

While the GoAsean channel is still relatively new, Papi Zak is excited to see the show being aired and hopes that it will be well-received.

The Halal Foodie premiered last night and airs every Friday at 9.30pm on GoAsean, Astro channel 737, with encore telecasts on Sundays at 8pm. 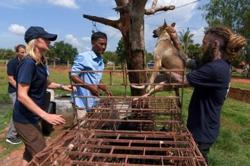 Astro First to air ‘Eye On The Ball’ next Thursday