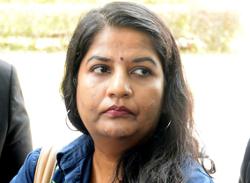 PUTRAJAYA: The Federal Court has ordered the Inspector-General of Police to execute a warrant of arrest against Muslim convert Muhammad Riduan Abdullah for disobeying an order to return his daughter to his former wife.

Justice Md Raus also restored the mandamus order by the Ipoh High Court compelling the IGP to arrest Muhammad Riduan until he handed over eight-year-old Prasana Diksa to Indira.

In an immediate reaction, IGP Tan Sri Khalid Abu Bakar said he will abide by the Federal Court order to arrest Muhammad Riduan, an odd job worker, for contempt of court.

Justice Md Raus remarked that Muhammad Riduan had willingly submitted himself to the jurisdiction of the civil court and due process was accorded to him but when the case did not turn out in his favour, he decided to ignore the court's rulings.

“The chronology of events showed that he has no respect for the court's order and this kind of conduct cannot be condoned,” he said, adding that the panel had concurred that Muhammad Riduan must be apprehended to face justice.

“To do this, the warrant of committal needs to be executed and the proper authority has to be the police,” he said.

Indira, 41, had appealed against the Court of Appeal ruling on Dec 18 2014 which rejected her application to enforce the Ipoh High Court’s mandamus order compelling the IGP to retrieve Prasana and detain her 47-year-old ex-husband.

Justice Md Raus said the general duties of police officers under the command of the IGP were provided for under Section 20(3) of the Police Act 1967 and these included the execution of warrants.

Based on the facts of the case, he said the IGP could not refuse to command his officers to execute the warrant of committal issued by a civil court.

“The High Court's decision which was affirmed by the minority in issuing the mandamus order is hereby reinstated,” the judge said, adding that no order was made on costs.

Justice Md Raus remitted the case back to the Ipoh High Court for the judge to monitor the progress of the execution of the warrant of committal against Muhammad Riduan.

Approached by reporters later, Indira said: “I have been waiting for such a decision for so long and it has been seven years just to get a judgment to see my daughter.”

In a majority decision then, the Court of Appeal dismissed Indira's appeal on grounds that the IGP had the discretion not to enforce the mandamus order as it was not of a public nature but a private family matter.

Khalid had said earlier that police were in a quandary as there were two custody orders, from the High Court and Syariah High Court, and executing one would mean showing disrespect to the other.

In the custody tussle between Indira and Muhammad Riduan, the Ipoh Syariah High Court had on Sept 29, 2009, granted custody of their children to the latter who had converted to Islam.

Muhammad Riduan had also converted Prasana, then 11 months old, and her siblings Tevi Darsiny, who was then 12, and Karan Dinish, at that time 11.

However, the Ipoh High Court on March 11, 2010, placed the children under Indira’s custody, with once-a-week access given to Muhammad Riduan.

When Muhammad Riduan failed to return Prasana to Indira, the court cited him for contempt and ordered the police to return the child to her mother. 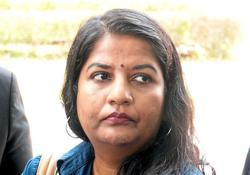