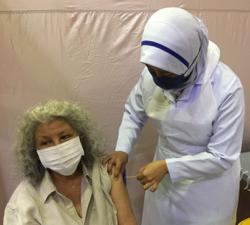 Loving mum: Schubert spending time with her children (from left) Harry, Jodie and Thomas in 2011.

Schubert had just turned 47 on Saturday.

At her side as she slipped away peacefully yesterday evening were singer Melissa Indot, who was her primary caregiver, and loved ones.

Schubert was admitted to Prince Court Medical Centre on March 11 following complications from her illness and had been under care there since.

The former Miss Malaysia-World 1991 was diagnosed with the disease in August 2015 after returning to Malaysia from England – where she was residing with her family – to nourish her passion for acting, having just come off performing in a theatre production produced and directed by Susan Lankester.

“Sammy was a loving mother, a great and loyal friend, and my ‘little sister’. I am very proud to have shared the stage with her,” said Lankester, who acted with Schubert in 4.48 Psychosis and directed her in The Good Body.

“Not having her with me will create a hole in my heart. I love her and miss her.”

With a panache that has seen Schubert through other adversities in her life, including the untimely deaths of her brothers Richard and Peter, and a miscarriage, she set out to spend whatever time she had left on giving it her all.

Even after learning of her slim prospects for recovery, as her tumour was deemed inoperable, Schubert went ahead with plans to work with KLPac luminaries Datuk Faridah Merican and Joe Hasham on an upcoming production.

“Too young, beautiful and talented. From the days of Scorpion Orchid in the 1990s, she charmed her way into our hearts,” said Faridah.

Close friend and fellow artiste Hans Isaac said he was “completely devastated by her death”.

Isaac and Schubert first acted together in the Scorpion Orchid.

“She loved people, she was always positive, she didn’t judge anyone, she was friends with everyone. You can’t pick just one thing that was good about her. It’s very rare to find someone like her,” he said.

Schubert had always said that her life had been blessed many times over, and that perspective was not dimmed by three gruelling rounds of chemotherapy.

Unfortunately, the tumour kept growing. But she didn’t go out without a fight.

In February this year Schubert, who had begun to shed considerable weight, was rushed to hospital with fluid building up in her stomach due to the tumour.

Her outlook was grim but Schubert defied doctors to walk out of hospital, spending the Easter holiday with her children in Penang.

That was to be the last holiday she would spend with them.

“I want to be around for my children. I want to run around with them and be active,” Schubert said in an interview with The Star.

She fulfilled that wish along with her destiny. She lived, loved and shone.