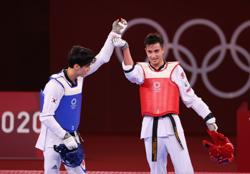 Yee at the world skating championship in Boston

PETALING JAYA: National figure skater Julian Yee Zhi Jie is one step closer to achieving his dream of competing in the 2018 Winter Olympics after recording his personal best for Free Skate at the 2016 World Figure Skating Championships in Boston on Saturday.

The 18-year-old, who is also Malaysia’s sole representative at the Championships managed to break the 200 mark after securing 202.94 points overall in the final of the FreeSkate of the competition.

Yee had told the Star just hours before the event that he was very happy to have reached the final stage of the competition.

“It feels great to be here. Being the first ever Malaysian to qualify for this Championship and the finals is absolutely an honour and a good experience.

“I think I can say that I'm ready to take on the FreeSkate later on and hope I will be able to do my best,” he said.

Yee had stressed that doing well in the competition was important as it would give him an idea of how close he is from qualifying for next year’s figure skating World Championships in Helsinki as part of his bid to secure a place at the 2018 Winter Olympics in Pyeongchang, South Korea.

“I'm currently only one step away from the Winter Olympics. I have already qualified for next year's World's Championship which will act as the qualifiers for the 2018 Winter Olympics.

“So all I have to do is put on a good show at that championships and hopefully qualify for the Olympics.

"And based on this so far, if I am in the same position as I am now for next year, chances of me qualifying for the Winter Olympics would be about 98%,” he said.

Yee said that he has been preparing for this championship ever since he secured the required qualifying points for the competition and squeezing out enough money to train in Canada since January.

The athlete travelled to Boston with his coach Michael Hopfes and team leader Irene Cheow.

“Because the Malaysian team here only consists of the three of us...we are very small compared to the American or Japanese teams who would have about at least 40 people in the team and 18 (competing) athletes,” said Yee.

However, he said he tries to keep his mind always focused on the competition ahead and does not to let the size of other teams affect him.

Yee said that being the only athlete representing Malaysia at competitions has become quite familiar to him but hopes that more athletes from Malaysia will be able to compete in future competitions.

Although not many of his supporters could afford to make the trip to Boston this time around, Yee remains grateful to all his fans who have supported him so far.

“I would like to express my appreciation to everyone out there. I am very thankful and happy to know that I've got so many people supporting me. Words can't describe how thankful I am for them,” he said.