Brimming with possibilities: Johor Baru is poised to become Malaysia’s second biggest city due to its swift transformation and strategic location next to Singapore.

JOHOR BARU: The Sultan of Johor has set the target of making Johor Baru the second biggest city in Malaysia after Kuala Lumpur.

Sultan Ibrahim Ibni Almarhum Sultan Iskandar said the southern city was poised to make the grade because of its swift transformation and strategic location next to Singapore, which other states did not enjoy.

He said in many countries, there were always two competing cities, citing Beijing and Shanghai, Melbourne and Sydney, Rio de Janeiro and Sao Paulo, and New York and Los Angeles.

“Johor stands in a season of transition. Being high-growth, socially progressive and strategic, the state is well-poised to assume greater significance in the overall journey of the nation.

“Johoreans too are ready to leve­rage on the momentum to position JB as the second city of Malaysia.

“JB is aware of this potential and we believe the Federal Government understands the need to push JB to a higher level,” he said in an interview on the occasion of his 58th birthday and first anniversary of his coronation as the Sultan.

He said the jewel of the upcoming business district will be a RM3bil complex called Coronation Square. It will come up on the site of the old bus and taxi terminal, just half a kilometre from the city’s transport hub and new immigration checkpoint at JB Sentral.

“All this is in line with my vision of making Johor Baru a financial hub,” he said.

The 2.6ha Coronation Square, so named to commemorate the coronation of Sultan Ibrahim this month, will contain serviced apartments, an office tower, a hotel, retail podium, a medical suite and a banking tower.

Unlike a hospital, the medical facilities will offer mainly outpatient services. It will have modern medical services along with traditional treatments such as ayurveda and acupuncture, and be marketed to international patients.

“JB is located next to one of the most advanced and developing metropolises in the world, Singapore.

“Singapore is one of the most expensive cities in the world and the flow will come to JB,” he said, adding that he had always pushed for the greater use of English because it was the main language in the island republic.

He said there was a need for an exhibition and convention hall in JB for the city to host big trade exhibitions, adding that he would push for a good concert venue suitable for quality acts and that even Kuala Lumpur faced the same problems.

His Royal Highness said once the HSR was in place, it would take only about 90 minutes to travel from KL to JB.

“We want people from the Klang Valley and Singapore to come to JB to enjoy the many facilities that we are building up now, from theme parks to premium outlets. Johor wants to make it easy for concert promoters to stage world-class acts here as we are a progressive state.

“JB has the advantage of learning from KL. We will improve on the strengths and pick up what’s missing in the federal capital and the Klang Valley,” he said.

Sultan Ibrahim said the latest investment figures by the Malaysia Investment Development Authority revealed that Johor captured the lion’s share of approved investment in Malaysia in 2015, adding that at 44% of total value, Johor totalled RM30bil as at September 2015 involving 104 projects.

“I want to make JB exciting and make all Johoreans feel proud and motivated. That is my birthday wish for the state,” he said.

His Royal Highness also said he was proud that the state had grown tremendously by 17.7% between 2012 and 2014, making it one of the fastest growing states.

Touching on the mammoth Forest City project in Iskandar Malaysia, Sultan Ibrahim said many doubted the project could be done, but it was now a reality with one of the best man-made beaches open to the public.

“There is no economic slowdown in Johor. Everything is still moving,” he said, adding that this project would create ample job opportunities for locals. 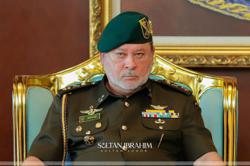