Members of the Kadazandusun community from the remote interior Tongod district performed their sumazau dance as High Court judge Datuk Douglas Primus formalised the settlement in the form of a consent judgment yesterday.

Details of the settlement could not be disclosed due to the courts confidentiality orders, said counsel Datuk Kong Hong Ming who represented the members of the Tongod community.

The terms of the settlement was agreed by all parties, he said.

Five villagers representing those living at seven Tongod had filed a suit against three companies as well as the state Land and Survey Department and the Sabah government on Oct 11, 2002.

The five individuals Darinsok Pangiran Apan, who was then 83-year-old, Kayah Unto, 22, Wilster Lawrence, 49, Jaafar Dorong, 51, and Jaimon Darinsok, 44 had sued the companies on behalf of themselves and other claimants of native customary rights of land totalling some 21,000ha in Tongod.

Other defendants named were the state Land and Survey Department director and the Sabah Government.

The case had since gone through various hearings at the court and two months ago, a mediation process began before Chief Judge of Sabah and Sarawak Tan Sri Richard Malanjum. The mediation was finalised on March 10 before the parties entered into a consent judgment before Justice Douglas yesterday.

Senior State Counsel Adriana Kusai acted for the Land and Survey Department and the Sabah government. 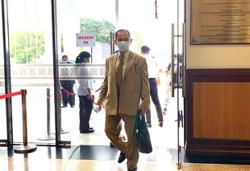