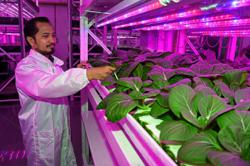 Dry spell: Children playing on the cracked earth of a padi field in Kampung Tengah, Tualang.

However, she said extreme heat episodes could cause damage to the yield and quality as well as plant processes such as germination and fertilisation.

“Rice is highly susceptible to heat stress, particularly during the reproductive and ripening stages.

“Extremely high temperatures – even for a few hours – during flowering can cause complete sterility while during ripening, this can lead to reduced grain filling and poor milling quality, resulting in more broken grains.

“In combination with other constraints, such as lack of water, canopy temperatures can increase even further. Unfortunately, hot days and warmer nights have increased recently,” she told The Star.

A 2°C rise in temperature could lead to a 13% reduction in padi yield while drought – or a 15% decrease in seasonal rainfall – could lead to a drop in yield of up to 80%.

The hot and dry weather could also increase the population of rice pest, which could contribute to the decline in rice yields.

“Lack of water, irregular rainfall patterns and water pressures will increase the intensity of some diseases of rice such as ‘brown spot and blast’ (rice leaf blast),” added Norlida.

On Thursday, The Star reported that the Government was ready to import more rice in case of shortage due to the persisting El Nino phenomenon.

Deputy Agriculture and Agro-based Industry Minister Datuk Seri Tajuddin Abdul Rahman had said that Malaysia imported 30% of rice for the nation’s consumption while the other 70% came from local growers.

“If production falls, we will increase the import to offset the drop in local supply. Of course, that will be a temporary measure,” he said.

This came as padi farmers in the rice bowl states of Kedah and Perlis complained that they had yet to start their replanting season despite having gotten their soil ready as there was no water.

According to Mardi, one of the ways to tackle the weather issue was by breeding for new rice cultivars or varieties, which were more tolerant to higher temperatures, more efficient in water use and with a longer ripening phases to ensure enough grain filling to cope with the changed climatic scenario.

This, she said, could possibly be done through genetic engineering.

Muda Agricultural Development Authority (Mada), however, advised farmers not to panic just yet as there is still enough water supply for this year’s first farming season.

Mada is an agency under the Agriculture and Agro-based Ministry responsible for the development and management of the padi industry in Kawasan Muda.

Its general manager Fouzi Ali said water levels at three dams in the area was at 81.77% capacity.

“The reservoir level is comfortable compared to the minimum of 202,342ha (550,000 acres) or 679mil cubic metres of water needed to start a farming season.

“This reservoir is sufficient for the first farming season,” he said in a statement yesterday.

Mada has also issued an irrigation and planting schedule for farmers in Kawasan Muda, a 100,685ha area in Kedah and Perlis dedicated to padi farming.

The schedule, which takes effect starting March 30, is placed at strategic locations in Kawasan Muda.

“With high levels of water at the dams, there shouldn’t be any critical problems. It is important for all farmers to follow the schedule to avoid water wastage,” said Fouzi.

There are two padi farming seasons a year – from March until August and from September until February.