Men expected to live until 72 and women until 77

PETALING JAYA: The life expectancy of Malaysians is on the rise, with men and women expected to live for another 12 to 17 years past the official retirement age.

This is an improvement from 2010 when male life expectancy stood at 71.9 years while for the female, it was at 76.6 years.

Its social and demography deputy chief statistician Dr Mohd Uzir Mahidin said the improvement was due to various factors, including good access to health care, infrastructure, food and a better standard of living.

“We are at par with the rest of the Asean countries and this is a result of a collective effort by various stakeholders, including the Govern­ment,” he said after a working visit to Menara Star here yesterday.

Malaysia is  likely to reach ageing nation status – where the number of people above 60 years make up at least 15% of the population – by 2035.

The department’s website stated that between 2010 and last year, the Chinese community in Malaysia continued to have the highest life expectancy, with males at 75.1 years and 80.1 years for females.

The Indian community recorded the lowest life expectancy with 67.7 years for a male and 75.8 years for the female.

Dr Mohd Uzir said that while there was a rise in people taking part in healthy activities such as exercising in gyms, the number of deaths caused by unhealthy lifestyle was also increasing.

“We noted a pattern in that one of the major causes of death in the country was due to unhealthy eating and diabetes cases.

“This could be due to the easy access to food, especially among youths, and the frequency of meeting up for meals, which could have an impact on their health.”
Article type: metered
User Type: anonymous web
User Status:
Campaign ID: 46
Cxense type: free
User access status: 3
Join our Telegram channel to get our Evening Alerts and breaking news highlights 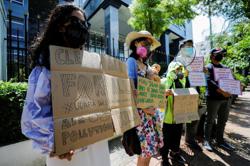