A 7.9-magnitude earthquake struck off the coast of Sumatra.- PHOTO: SCREENGRAB FROM USGS

JAKARTA: Indonesia issued a tsunami warning Wednesday after a massive and shallow earthquake struck off the west coast of Sumatra at 12.49pm GMT (8.49pm Malaysian Time), an area hit badly by the 2004 Indian Ocean quake and tsunami.

The warning was issued for west Sumatra, north Sumatra and Acheh after the 7.9-magnitude quake, the National Meteorolgical Agency said.

The epicentre was 808km south-west of Padang, the US Geological Survey said. It was 10km deep.

There were no immediate reports of damage or casualties but the shallower a quake, the more likely it is to cause damage.

Indonesia, especially Acheh, was badly hit by the Indian Ocean tsunami in 2004.

The country straddles the so-called "Pacific Ring of Fire", a highly seismically active zone, where different plates on the earth's crust meet and create a large number of earthquakes and volcanoes. - Reuters 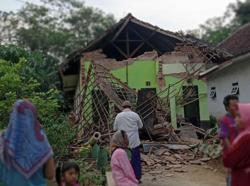 Home Minister: Govt to issue order on use of the word 'Allah'
Johor Maqis seizes 26 tonnes of maggot-infested cocoa beans
We are open to FTAs as long as it is a fair deal to us, PM tells industry players
Four police reports lodged over fake online banking site created by fraudsters
Carjacker detained by public in viral video
Three Bangladeshis nabbed for forging passports in Ampang
King congratulates Malaysian students accepted to study at Harvard College
Govt has no intention of imposing another nationwide MCO, says Muhyiddin
No sinister motive for Emergency, PM assures industry players at closed door meeting
Employer who assaulted bodyguards for fasting has underworld links, RM28.55mil worth of gold bars, cash seized