What a ‘great dame’ of a hospital IT has been fondly dubbed as the “grand old lady” of hospitals in Malaysia.

But the Health Ministry’s largest hospital, Hospital Kuala Lumpur (HKL), is far from outliving its glory days, despite being Malaysia’s oldest hospital at 146 years old.

Standing regal with 53 departments and units in Jalan Pahang, the HKL is poised to become a world class facility under a transformation plan currently being carried out by the ministry.

By the end of its facelift, the hospital is set to provide better comfort and treatment for patients, says Health Ministry (medical) deputy director-general Datuk Dr Jeyaindran Sinnadurai.

Aside from refurbishing the hospital blocks, he says part of the transformation plan is to “right-size” the facility to ensure that there is adequate space for patients to reduce congestion.

“This means that we will space out hospital beds to optimise comfort for patients instead of placing too many of them in one place. We are also in the process of upgrading medical equipment and facilities.

“With such efforts, we hope to re-brand HKL as a state-of-the-art hospital that meets international standards,” says Dr Jeyaindran, who is also the chairman of the taskforce to upgrade the HKL.

He adds that HKL’s capacity to treat patients is also expected to increase with the move to transform the facility, which was first developed as a district hospital in 1870.

But even now, while it is in the midst of a transformation, HKL has proven its mettle and shown its potential for much more, after it was crowned as the Best Hospital Brand in Malaysia under the Global Brands Magazine Awards 2016.

The hospital received the accolade for the first time under the Healthcare Awards category from the Britain-based branding magazine earlier this month.

The award is aimed at recognising exceptional service delivery and to reward such stellar performance with global recognition.

Together with HKL, hospitals from other countries in the region which were given similar awards are the Dr Jose Rodriguez Memorial Hospital in the Philippines, the Bumrungrad International hospital in Thailand and the Beijing Hospital of Traditional Chinese Medicine in China.

Dr Jeyaindran attributes HKL’s success in receiving the award to the dedication shown by its staff at all levels.

“Despite its current physical limitations, the hospital has shown that it delivers quality service to the people. I am pleased that HKL has won an international award as it is a reflection of its abilities,” he says.

While he cannot say when exactly the full transformation will be completed, Dr Jeyaindran says the first stage of the process is almost reaching its end.

Efforts to makeover the HKL started when Prime Minister Datuk Seri Najib Tun Razak announced in his Budget 2012 speech that the facility will be upgraded to a “premier hospital”, with an allocation of RM300mil.

Transformation efforts on the hospital include the construction of the seven-storey Specialist Complex and Ambulatory Care Centre.

The centre, which began operating in 2013, is made up of 16 clinical departments and support services such as pharmacy, pathology, radiology, Central Sterile Supply Unit and allied health services.

Last year, a multi-storey car park was open to the public and has since significantly eased parking problems faced by patients and their relatives.

He says the transformation efforts are aimed towards making the facility more patient-friendly and providing a better experience for all.

He adds that he is also preparing for a visit from Prime Minister Datuk Seri Najib Tun Razak to officially open the new car park and nephrology centre at the hospital.

On a more personal note, Dr Jeyaindran says the transformation of HKL is something close to his heart as he used to spend time there as a child.

“My late father was a senior consultant in the HKL. I grew up running around the corridors of this place.

“Today, as I walk the corridors as a senior consultant, not only does it bring back fond memories, but also a sense of pride and satisfaction that I am part of this second transformation of the hospital,” he says, adding that his father Tan Sri Dr Sinnadurai was part of the first HKL transformation in the mid-1960s.

“There is definitely some sentimental value for me in transforming the hospital.

“I have seen it grow from what it was to what it is worth today,” Dr Jeyaindran reminisces.

Dr Jeyaindran hopes that HKL will continue its quality medical care in today’s challenging environment and remain as one of Malaysia’s gems in the healthcare industry. 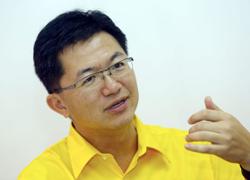