PETALING JAYA: She may have slipped under the radar for the past few years, but DC Comics has a Malaysian character – and she's a specialist in espionage.

However, Muni left suddenly and Barbara assumed her friend had died.

It turns out that at only 18 years old, Muni was recruited to an elite counter-terrorism squad. To keep the secret, her death was staged.

The two met again when Muni kidnapped Barbara in an attempt to coax her to join in the fight against the villain Knightfall.

But Obscura is not just any ol' spy. She also appears to be highly-ranked with a few men under her command.

For those who are still sceptical about Obscura's Malaysian roots, DC Comics writer Simone confirmed Munira's ethnicity in her Tumblr page.

"Hi there, I was wondering what ethnicity Munira Khairuddin from Batgirl #32 is supposed to be? I'm hoping she's Malay, because I don't think there's ever been a Malay comic book character," a commenter asked anonymously.

"She is Malay, in fact. And we will see her again in another book soon!" Simone replied on November 2014.

In another post in Sept 2014, Simone describes Obscura as a Malaysian Muslim woman who works "as a top espionage fighter in the Spy Smasher division".

But there's more to Obscura than meets the eye.

According to freelance writer Jaymee Goh, Obscura was actually modelled after a real-life person.

Goh said that inspiration for the character came from Munira Mustaffa, a friend of hers.

"So, earlier this year Gail Simone asked me for help developing a new character for the DC Universe and we came up with Munira Khairuddin, a super spy foil to Batgirl, revamping Spy-Smasher/Katrina Armstrong. Just found out that Munira made her debut in Batgirl #32 =) She's loosely based on an actual friend of mine, Munira Mustaffa, a Malay woman doing security studies in the UK right now with an eye to researching terrorism in SEAsia. Looking forward to how this develops," Goh wrote on her blog in December 2014.

Still, it's not just anyone who can get themselves written into the DC Universe.

The real-life Munira lives up to her comic persona and could even give Obscura a run for her money.

She completed her post-graduate degree in Countering Organised Crime and Terrorism at the Jill Dando Institute of Security and Crime Science, University College of London (UCL). Skills-wise, Munira is a polyglot; being able to also speak Russian and French.

*Due to copyright reasons, The Star is unable to republish images of Obscura but here's some descriptive assistance: Dark hair in a ponytail, tanned skin and wears a full bodysuit. Alternatively, the DC wikia page has images of the character here and here. 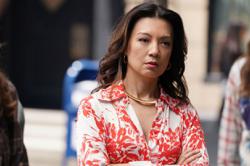