PETALING JAYA: The online registration of illegal foreign workers, which begins today, will require employers to pay RM1,200 as registration and administrative charges for each worker.

The cost does not include fines for immigration offences, levy, visa, processing fee and foreign worker work permits.

“These charges are not imposed by the Immigration Department but were set by vendors that had been selected,” he told mStar Online.

Two firms have been selected to handle applications for workers from Indonesia and Myanmar respectively while a consortium of three companies has been tasked to process applications involving other countries.

According to a department circular, the RM400 charge will only be imposed after the application of the foreign worker is successful and will be used by the vendors to cover the cost of getting the levy, visa and permit.

The department will impose other charges separately for matters like the levy.

The Government has recently announced new levy rates – RM1,500 for those in the plantation and agriculture sectors; and RM2,500 in manufacturing, construction and service.

But the implementation of these rates have been deferred until Feb 20 for the Government to seek feedback from industry players.

The Immigration Department would also impose charges for visa, which varies among the countries, permits (RM60) and a RM125 processing fee.

On Saturday night, the Home Ministry issued a statement to explain that the Illegal Immigrant Rehiring programme, which ends on Dec 31, was to give an opportunity for those working illegally to get valid permits and for employers to meet labour demands.

Strict conditions will be imposed on both workers and employers.

“Those who don’t qualify will be deported to reduce the number of illegal workers in the country,” the statement said.

The ministry said the rehiring programme was aimed at meeting the labour demand in various sectors.

It will also allow the authorities to determine the actual number of illegal workers in Malaysia, currently estimated at two million.

“The effectiveness of the programme will be evaluated in the first three months and improvements will be made.”

The ministry warned of stern action against employers who continued to hire illegal foreign workers after Dec 31.

Workers must have originally entered the country legally, must be employed and must not have a criminal record to qualify for the rehiring programme.

It does not cover workers from non-permitted sectors or those frozen by the Government.

The online application can be made on rehiring.imi.gov.my.

Many bosses sceptical about new scheme

Wanita MCA: ‘Dhaka Dolls’ arrival not a cause for concern 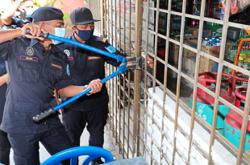 ‘Do not hire illegal foreign workers’