KOTA KINABALU: For the Mount Kinabalu guides, no sacrifice is too great.

Robbi Sapinggi and Joseph Solungin were fine examples of great men who gave up their lives to rescue others. They will be especially remembered for their selfless acts during the June 5 earthquake which claimed 18 lives.

On the fateful day, Robbi and Joseph were among over 130 climbers and guides descending from the summit when boulders and rocks came tumbling down the mountainside.

Some rocks hit 30-year-old Robbi, injuring his head and body. He stumbled and fell but shouted to the climbers to “keep going”.

Robbi managed to free himself from the waist-deep rocks but by the time rescuers reached him 10 hours later, he had died.

The remains of Joseph were found much later. From his posture, it appeared that he had tried to protect two other climbers who also died in the avalanche.

The sacrifices of both men, who were members of the Mount Kinabalu Guides Association (Pemangkina), did not go unnoticed.

The association was honoured with one of the 10 inaugural Star Golden Hearts awards.

“Robbi and Joseph symbolise what we are – that no sacrifice is too great to protect the people we’re responsible for,” said Pemangki­na president Richard Soibi, who was in Bundu Tuhan nearby when the earthquake struck.

Meanwhile, at the Kinabalu Park headquarters, 40 mountain guides were getting ready to escort climbers up the mountain.

“I asked them (the guides) to trek up to Panar Laban to check out the trail and see if they could help bring down those who were stranded,” said Richard.

Richard went up with his team in the afternoon. Upon reaching Panar Laban, he found that the trail to the summit was blocked.

After several failed attempts to rescue victims with helicopters due to strong winds, the stranded climbers managed to make their way down the blocked trail with the guidance of Sabah Parks ranger Mithunjay Langgim.

Other mountain guides who raced to Panar Laban earlier managed to bring down some of the injured that same afternoon.

This was poignantly captured in a photo of bandana-clad mountain guide Mohd Rizuan Kauhinin, who carried injured Singa­porean student El Wafeeq El Jauzy, 12, on his back for over 1km down the mountain trail.

Widely circulated on social media, it became the iconic symbol of the mountain guides’ heroism following the earthquake.

Richard said one of the most difficult tasks for the guides was picking up the remains of those crushed by the rocks and boulders.

“It was tough but it was something we had to do as guides,” said Richard, who leads the association of 250 licensed mountain guides, most of whom are local Dusun from Kampung Kiau, Bundu Tuhan and Kundasang.

“From young, Dusun people are taught to care for their neighbours and that helping others is the honourable thing to do.”

He said the association appreciated the Sabah government’s decision to raise their fees from RM180 to RM230 and to provide them with life and disability insurance.

“Our wish now is to see a memorial being erected at the Kinabalu Park to remember those who died,” he added. 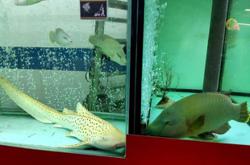