One month ago, TheStarTV.com’s assistant news producer CHARANJEET KAUR and team members were in the thick of action when two orang asli girls who went missing more than 40 days were found alive. She held Miksudiar Aluj, who was all skin and bones, in her arms as rescuers and her colleague rushed the girl to hospital. Yesterday, she and her team members, led by executive producer Mohamed Azam Zainal Ali, met up with the now chubby 11-year-old. Below are their stories.

KOTA BARU: Exactly a month after I held her in my arms, I visited Miksudiar Aluj to fulfil my promise to her to see her again.

With fried chicken, gifts, and colleagues in tow, we saw her in her room at Hospital Raja Perempun Zainab II.

I was anxious because I didn’t know if she would remember me.

She was distraught, malnourished and so skinny when I first saw her on Oct 9 – the day she was found alive with Noreen Yaakob, 10, at Pos Tohoi.

As it turned out, it was me who could not recognise the girl.

What I saw in the room was a pretty little girl, who was very shy.

She nodded when I asked if she recognised me. However, she was reluctant to make eye contact.

She was even too shy to eat the fried chicken I promised to bring her. 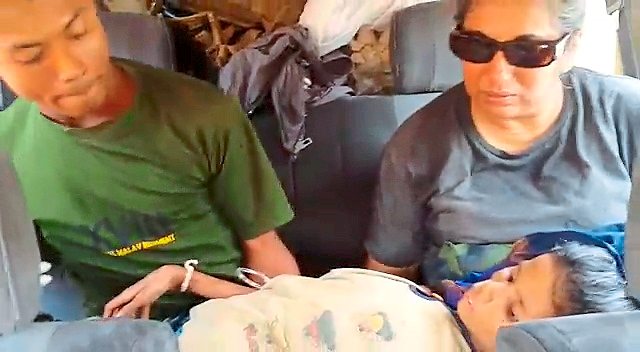 Flashback: Miksudiar lying on Charan's lap as they make their way from Pos Tohoi to a waiting ambulance.

But she warmed up after I brought out two soft toys donated by my colleague.

There were still no words from her but her smile melted my heart.

I managed to get her to sit on my lap. She was attentive when I showed her copies of the articles I wrote about her.

On the day of her discovery, rescuers had asked The Star to help take Miksudiar from Pos Tohoi to a waiting ambulance 30 minutes over rough terrain in our 4WD.

Our vehicle was the only one available at the time and she was on my lap throughout the journey.

It broke my heart when she told me then that she was hungry and craved for fried chicken.

I promised to bring it to her when she was well. For the past month, I longed to see her and to fulfil her wish.

My parting gift to her was a pair of white gold earrings, which were chosen by my sons.

I hope she treasures it as much as I will treasure my experience with her.