Raising funds from the dead

Selfless devotion: Hii’s contribution to Citizen Middle School goes beyond monetary terms. On weekdays, he performs a headmaster’s duties. But after school hours or during weekends, he could be working as the school carpenter or gardener. So, the financially fragile school is not in a dilapidated state. — DARRAN TAN/The Star

A headmaster works tirelessly to get money to ensure his school stays afloat.

HII Sui Chung, the headmaster of a small independent Chinese high school, is known to make an appearance at almost all Chinese wakes in Sibu. Last year, he attended more than 130 funeral services, and in the first nine months of this year, more than 80.

Not that he knew all the deceased or was related to them. He did it all for one purpose: to raise funds for financially tight Citizen Middle School (Gong Ming High School), headed by him.

This school in Sg Nibong, in the suburb of Sibu, has been providing affordable Chinese education for the farming community here for decades.

According to Chinese beliefs, if part of the money given by friends and relatives to help defray funeral expenses is given to charity or for a good cause, this gracious deed will translate into merit for the deceased in the next world or good karma for his family.

Hii, 74, has in fact become “famous” in Sibu after appearing at most of the wakes, seen as taboo by many Chinese. But he has not been haunted by any evil spirit or fallen ill for no reason, as feared by the superstitious.

“Last year, I raised RM100,000 for my school by going to more than 130 wakes. The money given to us ranged from RM50 to several hundreds, and the highest was RM10,000,” declares Hii in an interview with Sunday Star in his school. 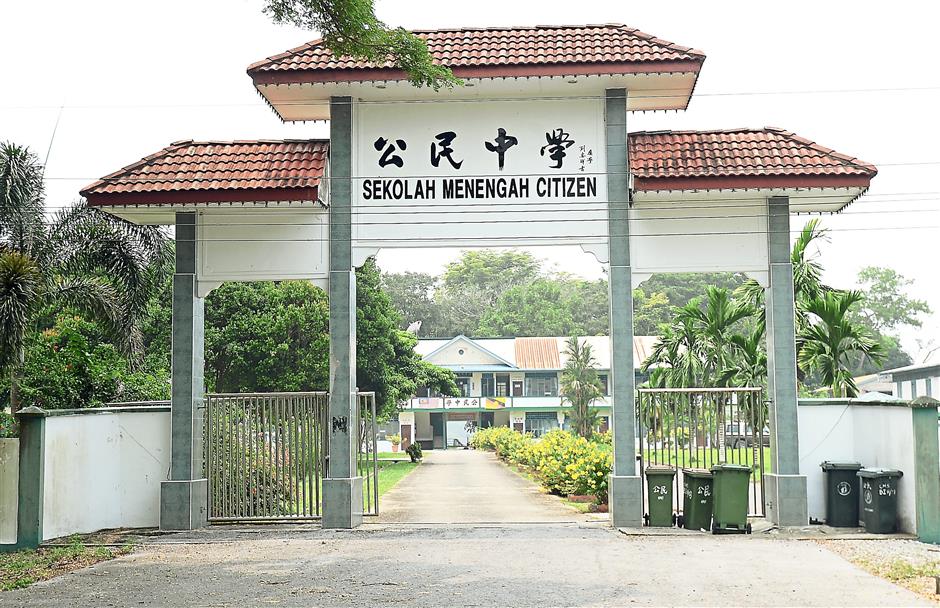 The 55-year-old Gong Ming High School faces a similar predicament afflicting most of the 60 Chinese independent high schools in Malaysia. As it is not supported by the Government, it has to raise funds to continue to function as a Chinese high school.

Although Hii is Catholic, he sees no conflict in holding lighted joss sticks to pay respects to those lying in repose.

“It is just paying respects to the dead, nothing more. I am sure God will be happy to see me serving education in my own little way.”

To ensure that he knows who has passed away, he monitors the local Chinese newspapers closely for bereavement notices. There are also kindred souls out there who alert him of the “tragic, but good news” for him to act on.

To raise more funds for Gong Ming, the energetic man organises students to perform lion dances to earn angpows during the Chinese New Year. In the last lunar festive season, his students collected more than RM60,000 in the 10 days they performed.

But Hii also has his own programme during New Year. He goes to commercial shops to ask for angpows for his school. Although some people call him the “New Year beggar” in jest, he is not bothered.

“I feel good asking people to support my school. The survival of the school to provide education to poor children here is of utmost importance to me.”

He has earned respect for his devotion and commitment to Chinese education. Graduates of Gong Ming return to help him in fund-raising activities.

“I have immense respect for Mr Hii. At such an old age, he is still working so hard for the school. Everybody who sees him at wakes respects and adores him,” says one of his students.

According to Hii, donations raised from funeral services and lion dances in the past 15 years have totalled over RM2mil.

Gong Ming, located along the beautiful Sungai Rejang in the ­suburb of Sibu, was built amid sprawling rice fields, scattered farms of fruits, vegetables and pepper.

The 2ha land given by a donor some 60 years ago was meant to take care of the education needs of rural children so that they did not have to travel over 48km to Sibu.

Currently, there are 101 students in Secondary One to Six, pursuing the syllabi set by Dong Zong in Kajang, Selangor.

With 11 teachers, one clerk and one headmaster “who doubles as carpenter and gardener during off-school hours”, it needs an operation expenditure of RM500,000 a year.

While the teachers are paid a monthly salary of RM1,000 to RM2,000, the headmaster only asks to be paid RM1,300 as monthly allowance.

Every year, the school faces a deficit of more than RM400,000 as collection from school fees is meagre. Monthly fees per student range from RM40 to RM60.

As most of the children here generally do not excel in studies, the school suffers in academic ranking. So, it is not easy to drum up financial support.

In addition, the school board comprises mainly small-time businessmen, not tycoons.

Yet, the school has survived for over five decades.

For this survival story, credit goes to everybody in the community, including Hii’s family members.

In 1992, Hii and his siblings donated RM210,000 to the school to build a hall named after his father. The money was the legacy left by their father.

On weekdays, he performs a headmaster’s duties. But after school hours or during weekends, he could be working as the school carpenter or gardener.

So, the financially fragile Citizen Middle School is not in a dilapidated state. It is a bright double-storey “complete school”, with six classrooms, a hall, library, meeting room and a spacious garden dotted with flowers and plants, as well as bee farms.

But due to poor infrastructure of the area, communication via telephones and fax faces regular hiccups. Sudden electricity cut is a norm.

Yet, this has not deterred the Taiwan university graduate in international relations to toil along with his devoted teachers, who are allowed to give tuition after school to supplement their income.

Hii says that before coming to this school in the early 1990s, he was a teacher with a prestigious school in Sibu town for 13 years. But after accepting the invitation to head the school that had no water and electricity supply, he decided propagating rural education was his destiny.

“Ten students from my old school followed me to this school. Life was difficult. We stayed in the school, carried pails of water, started a generator and grew our own vegetable and fruits,” says Hii, who grew up in the Ensuri farming area, near Sibu.

After transforming the school to what it is now, the headmaster says he is a “very happy man”.

“I love this school and its serene surroundings. It has become ­another home to me,” he says.

Hii, who has been attending funeral services on behalf of the school for over 15 years, says that thanks to the special allocation of RM210,000 from the Sarawak Chief Minister’s Office, Citizen Middle School will have enough funds to stay afloat this year. Last year, the state gave the school RM160,000.

But the donation drive for the school cannot stop. It’s time to plan for next year. As he sits in his small office with a Chinese calligraphic slogan “If you say you can, you sure can”, Hii says a long-term solution in fund-raising is to get a “famous and influential tycoon” to join and lead the school board.

But before this tycoon emerges, the tireless headmaster will have to continue to trudge to every possible wake in Sibu.