PUTRAJAYA: A group of Barisan Nasional leaders headed by Tun Dr Mahathir Mohammad have come together to voice out against the prosecution of former Batu Kawan Umno vice-chief Datuk Seri Khairuddin Abu Hassan and his lawyer, Matthias Chang, under the new anti-terrorism law.

“The government should release them. Don’t detain people under Sosma because that's not what Sosma is for. Sosma is for terrorists. Do you think Matthias or Khairuddin are terrorists? They merely reported what they think is a crime. For reporting that, you are questioned and detained? That is an abuse of power," said Dr Mahathir, who repeated his call for a vote of no confidence against Prime Minister Datuk Seri Najib Tun Razak.

“The government is not functioning according to the laws of the country but beyond the laws. That’s why we have come here to make a statement that we are against the abuse of laws of this country and other activities of government which are questionable," he said.

Both Khairuddin and Chang were detained under Section 124 of the Security Offence (Special Measures) Act (Sosma) 2012 over offences deemed detrimental to parliamentary democracy.

The press conference was held while Khairuddin and Chang were being charged at the Kuala Lumpur magistrate’s court with attempting to sabotage the country’s banking and financial systems.

Khairuddin was arrested after making several reports overseas, including in Singapore, Switzerland, France and Hong Kong against 1MDB.

Sosma was initially introduced to combat terrorist threats in Malaysia, and the Government had assured that the act would not be used against political opponents.

“Based on the Prime Minister’s promise on April 16, 2012, the two citizens must be released immediately and the authorities must provide a guarantee that no one else will be arrested under the Act merely for expressing their views, opinions, criticisms or take part in any action which is authorized by the Constitution and laws of the country,” read a statement by the group and co-signed by another former MCA president, Tun Dr Ling Liong Sik, who was not present at the press conference.

Muhyiddin, Razaleigh and Dr Mahathir have all stood up as critics of 1Malaysia Development Berhad (1MDB).

Muhyiddin’s opposing views on the state investment fund was what caused him to be dropped in the July 28 Cabinet reshuffle alongside Shafie. 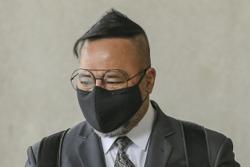