KEPALA BATAS: The roti canai has been given a colourful variant in Kampung Permatang Keriang in Penaga here.

“After retiring from working in a factory five years ago, I started the roti canai business,” said the 44-year-old.

“Every day, I would toss the dough and cook them on the pan but about a month ago, an innovative idea struck me,” he said.

“That’s when I started mixing permitted food colouring and flavouring into the dough to give them a new look and taste. And, the idea is well received by my customers.”

Abdullah, who is assisted by his 18-year-old son on weekends, said sales had increased since then, adding that on a weekend, he could sell more than a hundred of each colour.

“I find the coloured roti canai very attractive,” he said. “The flavours are nice, too.”

His mother Suriani Sidek, 37, said it was her first time seeing a colourful roti canai.

Businessman Abdullah Pataga, 24, from Hatyai, Thailand, also bought one on his way to work in Kuala Lumpur.

“Back in Thailand we have several types of roti canai to choose from, but never in colours,” he said. “It is an interesting idea.”

Besides the coloured roti canai, which are sold at RM1 each, the stall also sells the normal version from 7am to 11.30am daily. 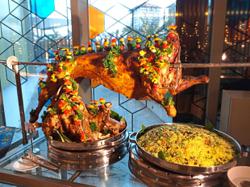