Split views: Stun guns are not legal in Malaysia and many are having mixed reactions on whether it should be made available through proper channels.

“The police can consider licensing its use and also give training to those who need it, such as women, shopkeepers and security personnel.

“The training should also include first-aid expertise to resuscitate those who are severely harmed by the stun guns,” he said when contacted.

Syed Jaafar said he was aware that the electroshock weapon was available in the black market and had even seen high-tech ones.

“It’s common to find it in the black market. It is openly sold because people believe it is useful for self-protection.

“If the police can regulate the use and sale of stun guns, then there can be a proper supply of high quality and safer stun guns instead of products from dubious manufacturers,” he said yesterday.

However, he pointed out that pepper sprays were legal and those who felt a need for protection could consider that option.

He was commenting on the public response on how easy it is to buy a stun gun at night markets and electronic gadget shops here.

A woman commented on The Star Online’s Facebook page that she “gotta buy one” after reading The Star’s report on stun guns.

“The people who need such self-defence weapons are common citizens ... personal security starts with themselves,” wrote another Facebook user.

A general check showed that many women in particular expressed a desire to own a stun gun for self-defence.

Malaysian CPF vice-chairman Tan Sri Lee Lam Thye called on the authorities to explain the easy availability of stun guns in the country.

“I was shocked. It is too easy to use a stun gun offensively.

“This weapon should never have been allowed to be sold so freely,” he said. Consumers Association of Penang (CAP) education officer N.V. Subbarow felt that the widespread adoption of stun guns for personal protection would only lead to more violent crimes.

“If everybody carries a stun gun, robbers will then come up with something even more violent to beat stun guns,” he said.

“It might be tempting to keep one at home or in the car, but I think we don’t need this kind of things to be the norm in Malaysia,” he added.

Though essentially a self-defence weapon, robbers on a motorcycle used a stun gun last Sunday to immobilise a 53-year-old woman on foot before stealing her handbag containing her smart phone and RM200 in Taman Brown, Penang.

Stun guns can be bought for as little as RM40 at night markets and electronic shops. 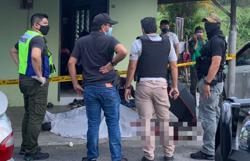