Malaysians from all walks of life celebrate National Day

KUALA LUMPUR: Malaysians from all walks of proudly display their patriotic spirit and solidarity in celebrating the National Day at Dataran Merdeka.

The people had the opportunity to witness almost 13,000 participants from the public and private sector, security forces, school students and a group of mountain guides take part in a mesmerising parade at the venue for the National Day celebrations themed "#sehatisejiwa" (One Heart, One Soul).

Shortly after arrival, Tuanku Abdul Halim took the salute and inspected a guard-of-honour mounted by four officers and 103 men from the 1st Battalion of the Royal Malay Regiment from the Sungai Besi Camp led by Major Mohd Herdi Ismail. This was followed by the hoisting of the Jalur Gemilang by Royal Malaysian Navy personnel, accompanied by the singing of the national anthem Negaraku.

A 14-gun salute was fired by the 41st Battery of the Royal Artillery Regiment.

The celebration which was broadcast live nationwide, started with a special performance, Derap Seragam, by 900 officers and men from the Malaysian Armed Forces (ATM).

The performance was a first for the ATM at a national day parade; it was followed by a musical interlude mounted by school students.

An LED screen measuring 108 metres by nine metres - the biggest ever used in any celebration in the country - was also installed at Dataran Merdeka to enable the thousands of people get a clearer view of the action.

This followed by the pledge of allegiance, led by Noradzmi Baba from the Kuala Lumpur FT Education Department who has performed the task since 1987. And for the first time, he was accompanied by five Gen Y icons. 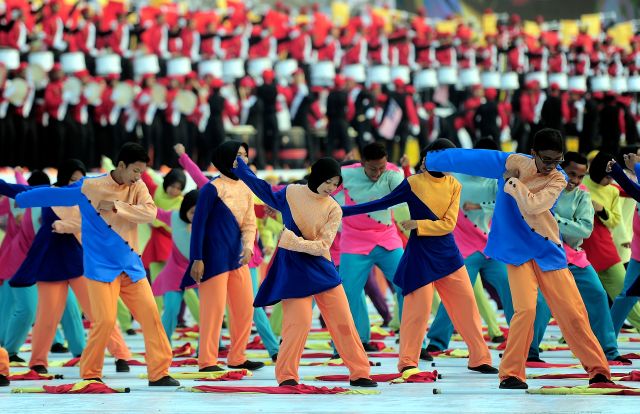 The march past was led by a contingent consisting of trainees from Institut Kemahiran Belia Negara carrying the Jalur Gemilang and the flags of the states followed by the "Explorasi Sehati Sejiwa" contingent made up of representatives from the Communications and Mulitmedia Ministry, government departments and agencies, non-governmental organisations and the corporate sector.

The "Explorasi Sehati Sejiwa" contingent is on a roadshow around the country to promote the Sehati Sejiwa theme and will conclude the expedition on Malaysia Day.

The participation of the mountain guides this time around was of particular interest as they had played an instrumental role in rescue missions on Mount Kinabalu in the aftermath of a devastating earthquake that struck in the area on June 5.

As for the children present, they were a picture of excitement in seeing various mascots from local animation houses, notably Upin and Ipin and BoboiBoy who were part of the animation contingent.

Assets showcased by the Royal Malaysia Police like the Kawasaki GTR 1400 and Honda ST 1300 motorcycles used by the traffic police to control traffic, escort VIPs and for patrols were also a hit with the crowd.

The ATM also showed their latest Army, Air Force and Navy assets, including the G. Wagon armaments carrier used by the infantry, besides armoured personnel carriers and howitzers.

Up above, the spectators were feasted to a formation flight by nine Pilatus PC 7 aircraft which are used for pilots' basic training by the Royal Malaysian Air Force, its latest A 400 M transport plane and a fly past by 11 Sukhoi SU 30 MKM fighter jets.

Ending the celebration at Dataran Merdeka was a special peformance, Rakyat Bersepadu, to reflect the harmony among the various races in the country. This was captured via traditional dances by more than 1,000 participants. - Bernama