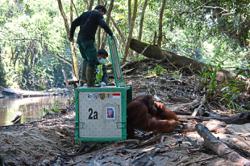 Gedau when he was found at the oil palm estate

KOTA KINABALU: After two weeks fighting for his life, 20-year-old male orang utan Gedau has succumbed to his injuries.

Gedau, who was found on July 13 in an oil palm estate in Gedau, Beluran, died at 4.30pm on Sunday due possibly to blood poisoning from the infections to his wounds on his body.

Sabah Wildlife Department director William Baya said in a statement that Gedau died due to severe complications initially caused by the savage attack by an Indonesian plantation worker.

“Our veterinary and medical team at the Sepilok Orangutan Rehabilitation Quarantine and Clinic facility tried their best to save it, and for the first few days the orang utan seemed to be improving,” he said.

“Unfortunately when the orang utan was further observed and monitored it became obvious that the parang wound to the back was so deep that it punctured into the air sac (a loose pouch located around the throat used for vocalising), causing severe infection,” William said.

“Even with all our expert care and medical treatment the results of the post mortem confirmed that the orangutan died of acute and severe septicaemia (commonly known as blood poisoning) caused by the initial parang wound and also the smaller secondary wounds that was probably caused by the same weapon,” he added.

Gedau was discovered by plantation workers at the estate not far from east coast Sandakan district and was handed over to wildlife officials the next day after the workers noticed wounds on its body.
Syam Sul, 38, claimed that he attacked the orang utan after it chased him and has been jailed for a year.


William said they would be appealing for a heavier sentence to be imposed on Syam Sul now that Gedau has died.

"Since this case has escalated to a killing of a fully protected species and not just injuring it, I have directed my prosecution officer to discuss this case with the court to consider appealing for a much heavier punishment for the orangutan killer,” he said.