KUALA LUMPUR: Myanmar should be expelled from Asean for committing genocide of the Rohingya, says Tun Dr Mahathir Mohamad.

The former prime minister said the Rohingya had been a part of Myanmar for over 800 years and it was against the law to expel people based on their origin.

He said if Malaya back then could accept those who were brought in by the British colonialists, Myanmar should also accept the Rohingya.

Delivering his keynote speech at the “Plight of the Rohingya, Crime Against Humanity” international conference here, he said Asean as well as the United Nations should act against Myanmar.

“Countries like these only give us (Asean) a bad name. So if you want to commit genocide, leave Asean,” Dr Mahathir said.

“Myanmar has not responded to requests to be more humane. Instead, it continues the merciless killing of people,” he said, adding that the Rohingya did not deserve such a fate.

“I even wrote a letter to Aung San Suu Kyi on this matter, but there has been no response.

“So, the fate of the people there needs to be defended from the outside,” he said.

While emphasising that the “boat people situation” would not have existed if not for Myanmar, Dr Mahathir added that Asean’s “no interference” policy had limitations, which had been breached by Myanmar.

“If it is a political matter, then yes, it is acceptable. But there should be a limit to what constitutes non-interference.

“Although it is internal, the killing of people should not be tolerated, they should not have the right to treat people that way.

“In fact, it should be a practice worldwide, where a code of human behaviour should be set.

“If it is breached, then other countries should have the right to interfere,” he said.

Dr Mahathir added that Malaysia should make it an international affair. 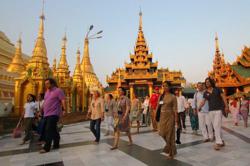