Final goodbye: People from all walks of life paying their respects to Mooney (inset) at the funeral.

PETALING JAYA: At the launch of his book Servant of Sarawak in April 2013, Datuk Dr Peter Mooney declared: “J’y suis, j’y reste (Here I am, here I stay).”

Yesterday, at 5.15am, the man who carved an illustrious career as a civil servant and a lawyer in Malaysia passed away in his beloved adopted homeland. He was 92.

A serene send-off was in store for him at the St Francis Xavier Church, which was filled with people from different races and religions, friends and colleagues, past and present.

Father Peter Kim, who conducted the funeral service, said it was Mooney who had asked that the service be held on the same day he died.

“He wanted a simple service, as he always held the principles of simplicity and humility,” said Kim during the service.

It was in 1953 that Mooney, an adventurous young Irishman and newly qualified lawyer, left his homeland to head east, taking on the position of Crown Counsel in Sarawak. He became immersed in Sarawak and its people.

“I thought that I had come to civilise the people. It was they who civilised me,” he wrote in his memoirs.

Mooney eventually became the Sarawak attorney-general and also served on the Supreme Council and Council Negeri.

He moved to the peninsula in the 1960s and founded the legal firm Skrine and Co with the late John Skrine in 1963.

Mooney was awarded the title of Dato’ DiRaja by the former Sultan of Selangor in 1985 and made a Knight of the Order of St Gregory the Great by Pope John Paul II in 2003.

In 1986, he was appointed Honorary Consul of Ireland in Malaysia. In March 2013, he was awarded the Malaysian Bar Lifetime Award for his contributions to the development of the law, especially those related to the rights of indigenous people.

Current Befrienders chairman Mary Raj remembers that Mooney was instrumental in getting the permanent premises at Jalan Templer for the organisation.

“He was a dedicated man who came in faithfully to do his duty until the day he was hospitalised,” she said.

“I will remember him for his integrity, intelligence, wit and sense of humour.”

In his citation for Mooney at the Malaysian Bar Lifetime Award, senior lawyer Philip Koh Tong Ngee said: “His conduct of court cases and advisory work bear the hallmarks of courtesy and grace found solely in those for whom law is a genuine vocation rather than a trade or business.

“His decision to leave the Bar in Edinburgh and move to Sarawak (then a British colony) had not been easy, but he readily adapted to its terrain and, more significantly, to the people.

“Here he lived out his calling, bestowing his manifold gifts upon the community that he chose to serve, and of which he later wrote: ‘I had become familiar and at home in Sarawak. I had no home elsewhere’.”

Datuk Joy Appukuttan, past president of the Catholic Lawyers Association, Kuala Lumpur, said Mooney was a wonderful man whose attributes are plentiful.

“Malaysians must record his contributions historically so that the future generations will be reminded of the good deeds he has done for the nation,” he said.

“Apart from The Befrienders and Hospis Malaysia, he was the catalyst for the establishment of the Seri Seronok Retirement Home and Stella Maria schools and an inspiration for the setting up of the Catholic Lawyers Association.”

Mooney was born in Donegal, Ireland, on May 22, 1923, and graduated from the University of Glasgow, Scotland.

During his legal career, he conducted trials and appeals in all Courts in Sarawak, Malaysia and Singapore up to and including the Judicial Committee of the Privy Council.

Former Court of Appeal judge Datuk Mahadev Shankar said: “Peter brought with him into the Malay-sian Bar a lustre which was uniquely his own.

“Apart from his encyclopaedic knowledge of the law, he was also deeply steeped in the classics and also a superb connoisseur of classical music.”

Shankar desribed Mooney as reclusive but those who got within his inner circle were the privileged few who shared his wisdom and low-key striving for perfection in everything he did.

“He will be sadly missed by all who knew him,” he said.

Datuk Tommy Lee, a friend and former partner, said Mooney was highly regarded by all who knew him for his contributions to the law, his church, his charities and his examples as a highly principled person.

“He gave away most of his wealth during his lifetime to those he loved and deserving causes,” he said.

Another long-time friend, Datuk Henry Barlow, who is currently away in London, said: “Peter was a remarkable man, and we are unlikely to see his match again.”

Prof Dr Ghazali Musa, one of Mooney’s adopted sons, penned a touching poem titled My Dad for him at an event held by the Catholic Lawyers Association in May 2013 to celebrate his turning 90.

My Dad is the source of my knowledge, power and wisdom

My Dad is my life’s greatest blessing.

My Dad is the wind beneath my wings.

Mooney’s body was transported to the Nirvana Memorial Park in Petaling Jaya for cremation following the service. 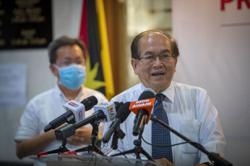