Winning the young hearts and minds

Get them young: 1 Jakim is going down to the mosques, schools and universities to spread the truth on IS and jihad. 2 Jakim wants to fight IS on its turf as in this hashtag campaign it has launched for university students, Mahasiswa Islam Tolak Keganasan.

With the Prevention of Terrorism Act (Pota) in the offing to deal with terrorism, namely the growing threat of the militant IS, it is time to tackle the battle at the ideological front.

“DON’T judge the Mujahideen (jihad fighters) in Syria and Iraq yet. Pray to God that the truth will prevail.”

If you go to the Internet, that is the message from most of Malaysian ustaz and ulama on IS (Islamic State), laments a 19-year-old student who goes by the name of Ahmad.

“It is no wonder many young people are confused. There is no clear stand.”

Like many, he is surprised to hear there is a fatwa (edict) against the militant movement, and that it is available online.

This confusion is something that the Malaysian Islamic Development Department (Jakim) is seeking to address urgently.

This is why we have set up a cross-agency Jihad Concept Explanation Action Committee, says Jakim director-general Datuk Othman Mustapha. 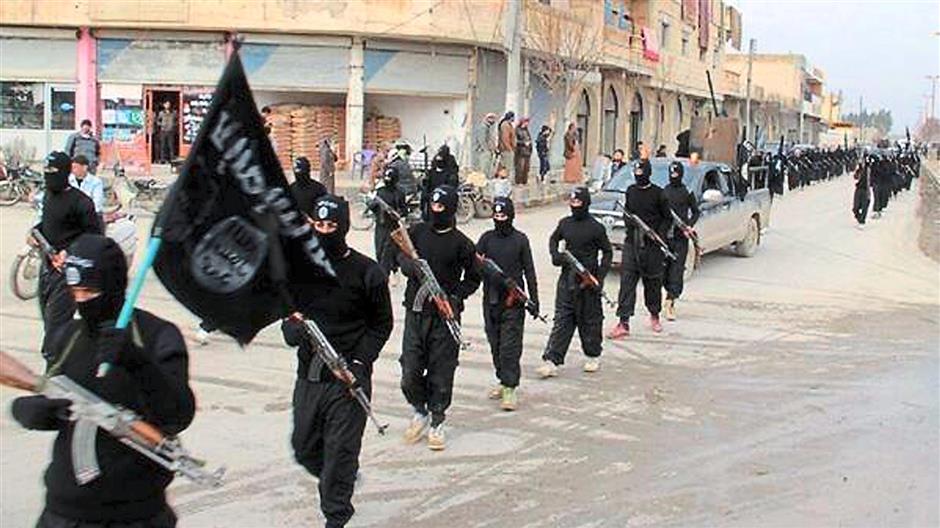 Deceptively rosy picture: An undated picture on a militant website showing the excitement of being an IS fighter to lure young people.

“The committee’s aim is to come up with a clear plan of action to address misconceptions about the concept of jihad (holy war), including conducting various programmes on the ground in collaboration with the National Blue Ocean Strategy to ensure a more structured and comprehensive implementation,” he says.

Other than the six agencies in the committee which include the police force, Institute of Islamic Understanding Malaysia (Ikim) and Al-Hijrah Media Corp, Jakim is looking to work more closely with the Malaysian Communications and Multimedia Commission (MCMC).

Says MCMC outreach and engagement division head Eneng Faridah Iskandar, it is important to counter the IS propaganda narrative online as what the militant group puts out is deceptively rosy.

“The narrative used is positive – it’s about renewing their religion, to be a better person and sometimes people get swayed by those sentiments and when the brainwashing starts, that’s when young people who have that tendency and those who want to rebel or be different will be snared.”

To counter that, Eneng says the authorities will need to work together to come up with content – specifically the correct information on IS and jihad – that is both accessible and interesting for young people.

“We need to address the main ‘attraction’ which is the religious element – how to be a better Muslim and get to heaven – and for that we would need to work with Jakim and the police.”

However, Eneng believes that the main front, even for MCMC, is on the ground where they can meet with young people face-to-face to train them to be more technologically-savvy and empower them to manage information online and on social media.

“We need to go back to the avenues that we are bringing up the children with, so MCMC’s Click Wisely initiative is running various workshops and programmes in the community, including at mosques.

“Recently, we were invited by a few mosques around the city to conduct school holiday programmes for the children in their community, and we are interested in doing more of them,” says Eneng, asking anyone who is interested in such workshops to contact MCMC.

She strongly believes it is important to draw young people into conversation on IS, why they are called terrorists and what they have done instead of trying to hide them from it. A screengrab of a posting by a Jihadi bride from Scotland depicting the romance of being a militant’s woman.

It is no surprise that Jakim has made schools, universities and other youth-oriented spaces their new “battlefront”.

At universities nationwide, Jakim hopes to identify Muslim student leaders to help disseminate the true meaning of jihad through the Islamic lens as well as conduct various anti-violence and anti-militancy campaigns on campus.

Adds Othman, Jakim has also identified a list of Islamic scholars and preachers across the country under a programme called the National Convention of Preachers to coordinate the work of clarifying the real meaning of jihad.

“Scholars and ulama are important because they play an important role in relaying the real truth. They have a great influence on the general public; if their preaching or message is wrong, that is the teaching that the public will learn and hold,” he explains.

According to the International Centre for the Study of Radicalisation at King’s College London, more than 12,000 foreigners from 74 countries had gone to fight in Syria last year, and around 5% to 20% hailed from South-East Asia.

To date, the police have arrested some 75 Malaysians on suspicion of being involved with militant activities, 25 of whom have been brought to court.

“We should not let this minority group taint our reputation as a country that practises an Islamic way of life in a pluralistic and moderate society. The reality is, those who carry the name of Malaysia into the fighting are only tarnishing Islam and the country’s name,” says Othman, pointing out that many prominent scholars in the world, including Malaysia, had warned their fellow countrymen against jihad in Syria.

In fact, he adds, the Chief Rabitah Ulama of Idlib, Syria, Sheikh Abdullah Mustafa Rahhal had stated that many of the Malaysian and Indonesian youth involved in the fighting in Syria, did not understand the real meaning of jihad in Islam.

“Sheikh Abdullah said that these youths who were so enthusiastic to carry arms in the name of jihad also did not understand Arabic, Syrian history and culture, or even the current situation, making them vulnerable to the manipulation and exploitation of the IS militants.

“So, even if they had come with a sincere intention of jihad, their lack of awareness of the complexity and intricacy of the situation combined with their overzealousness, make it very easy for them to get swayed from the true path and be trapped into a fight that has nothing to do with jihad,” he adds.

This is what pushed the National Fatwa Council to come out with the edict that the call of jihad and martyrdom in Syria is unIslamic, and the Muzakarah (dialogue committee of the council) has affirmed that death at the battlefield is futile and they will not be categorised as a martyr (mati syahid).

Othman believes that those who are drawn to the idea of jihad in Syria have been misled due their lack of religious understanding.

“There is no doubt that the jihad touted by the IS militants really deviate from the true teachings of Islam. The concept of jihad is very broad and its literal translation means determination.

“Among the things we have to consider is whether Islam allows its followers to kill innocent people, including Muslims. We have to ask ourselves, does Islam permit violence, slaughter, gruesome murders including destroying houses of worship?

The militant group upholds an extremist ideology and justifies its violence in the name of Islam because its members are religiously ignorant and have received the wrong teachings of Islam, he adds.

“So, any Malaysian Muslim who joins them with the intention of jihad will also be considered unIslamic because the goal of IS conflicts with Islam.”

For now, Jakim is continuing its efforts to drive the true meaning of jihad through Friday sermons, seminars, talks and its special leaflets.

While a campaign has been launched on mainstream media to spread the real meaning of jihad, including on TV, Othman concedes that more needs to be done on the Internet and social media. Get them young: Jakim is going down to the mosques, schools and universities to spread the truth on IS and jihad.

“We have seen that in many cases, those who get tangled in the IS web are those who keep to themselves and prefer not to share their feelings with others, and are more likely to spend all their time online,” he says.

“The risk is that we see that they have no one to discuss and verify if what they are feeling and believing in is correct. And when they are not able to control their emotions or burning spirit to take up the jihad cause, they will go out there to take reckless and violent action.”

Parents need to ensure that their children are equipped not only with a strong religious education and the right values but also the right information, says Othman.

“Parents can take specific action to monitor and control their children, but the real problem is ignorance, confusion and misunderstanding,” he elaborates.

Crucially, Othman says parents need to arm themselves with IT knowledge if they want to compete with children who are exposed to the “information overflow”.

“Parents have raced to make their children IT-savvy and equip them with other technological knowledge in the hope that these skills and abilities will put them in a better standing in society.

“Ultimately, this is only a physical fuctionality that will test the children’s ability to live and operate as a good Muslim.

“Without a good religious foundation, no matter how successful they become in life, it will be futile as their contribution to society will only bring more harm than good,” he concludes.