GEORGE TOWN: They target the legs first and before you know it, you are drenched from top to toe.

Revellers at the Water Festival “fired” at visitors with their water guns at the Wat Chayamangkala­ram and Dhammikarama Burmese Buddhist temples in Burma Lane, where the three-day celebrations began yesterday.

The Water Festival, better known as the Songkran celebrations in Thailand, marks the traditional new year festivities in many South-East Asian countries such as Myanmar, Laos and Cambodia.

The event is in accordance with Buddhist and Hindu solar calendars. 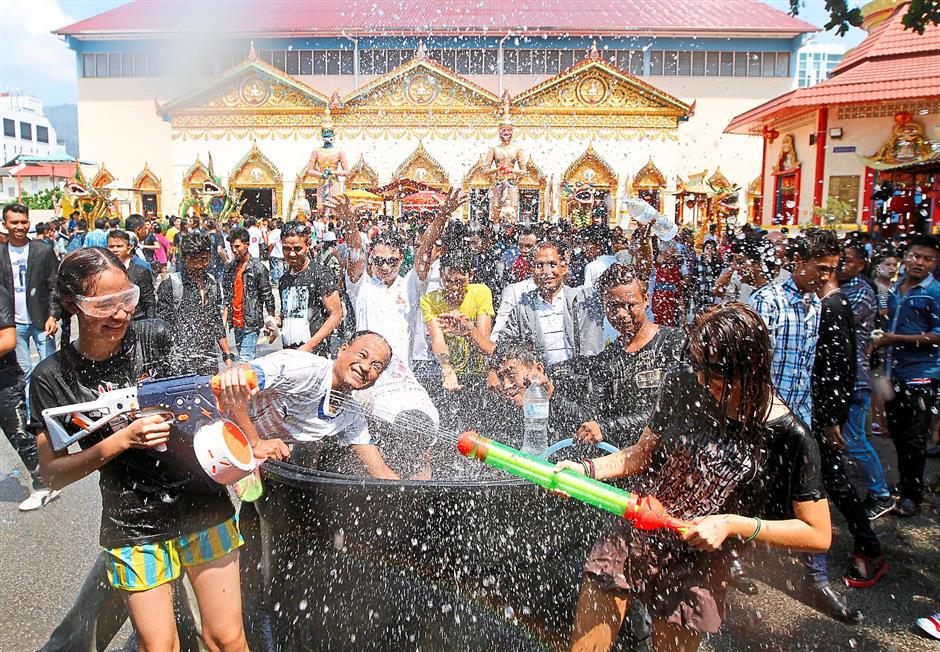 Fun with water guns: Vicky (left) and Fang Siu (right) engaging in a water duel as other revellers target them from the sidelines at the Wat Chayamangkalaram Buddhist temple in Penang. — LIM BENG TATT / The Star

One of the participants was retail assistant Jasmine Qing, 21.

“It’s my day off and I wanted to come and pray. What a shock I had when people started spraying me,” she said, adding that the only dry refuge in both temples were the consecrated shrine halls.

Thai student Chew Fang Siu, 13, who is studying in Penang, is no stranger to the celebrations. She ran about chasing her friends with a high-pressure water gun.

“It’s my birthday today. I’m having a lot of fun but things are rowdier in Thailand. My whole country would be wet for almost a week.”

Her friend Vicky Boonsiri, 16, said that centuries ago, the festival would see the bathing of every Buddha statue in Thailand.

“It’s very hot at this time of the year in my country so after washing the statues, people start splashing each other.”

About 20,000 revellers thronged both temples, with Thai and Myanmar nationals forming the vast majority.

College student Reuengrit Pluenjit, 22, and her two friends admitted they were somewhat frazzled.

“They always target the girls. Look at us. All our make-up is gone,” said Reuengrit, who is studying in Penang and celebrating Songkran here for the first time.