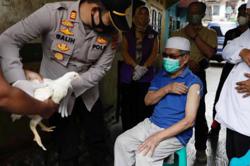 Executive producer Najwa Abu Bakar said the success was a godsend for the movie, which was made amid an increasingly challenging domestic market.

"We will keep making movies although it's been quite a difficult home film market in the last two or three years.

“I'm sure this is not an uncommon problem for other movie making brothers and sisters in Asean," Najwa told a press conference after the ceremony.

Special guest Datuk Jackie Chan, who was visiting Borneo for the first time, was given the Asean Inspiration Award.

Accepting the prize, Chan said making movies was all he had known in his entire life.

"All those years, I only knew how to keep on making movies. I tried to do my best. I 'promised' to keep hurting myself if I must (in order) to make better movies," said the 61-year-old.

Chan quipped he could return to Sarawak to make a love story, but only with Tan Sri Michelle Yeoh as his romantic interest.

Of the 14 categories, the Filipino productions took home five gongs, which came as no surprise as movies from the country were nominated the most.

Other wins for the Philippines were Bendor for Best Editing, and Cherie Gil's Best Actress Award for Sonata.

The Lifetime Achievement went to veteran Filipino actress Nora Aunor, who received the award from Yeoh, the previous winner.

"We saw that Asean movies tended to focus on social problems, but also on the strength of the people," he added.

Aiffa is held in Kuching biennially.

A China delegation announced its intention to set up tentative projects such as the Malaysia-China Production Hub and a theme Park in Kuching.

The Sarawak Government announced it would set up a unit within the state Tourism Ministry to see through the proposal and to help attract other television productions here.