People should not only be safe, they should also feel safe

THIS is my second article on crime. The subject of crime is not only interesting, it is also our top concern.

In a survey last year on public concerns, crime came up as number one.

In the first article published on Feb 27, I explained that there are different views on crime and a gap between reality and public perception.

In this article, I will be addressing the fear of crime.

The fight against crime must be relentless – there is no doubt about it and the crime index must be reduced. People should not only be safe, they should also feel safe.

Such is the fear of crime, as shown in Figure 1. 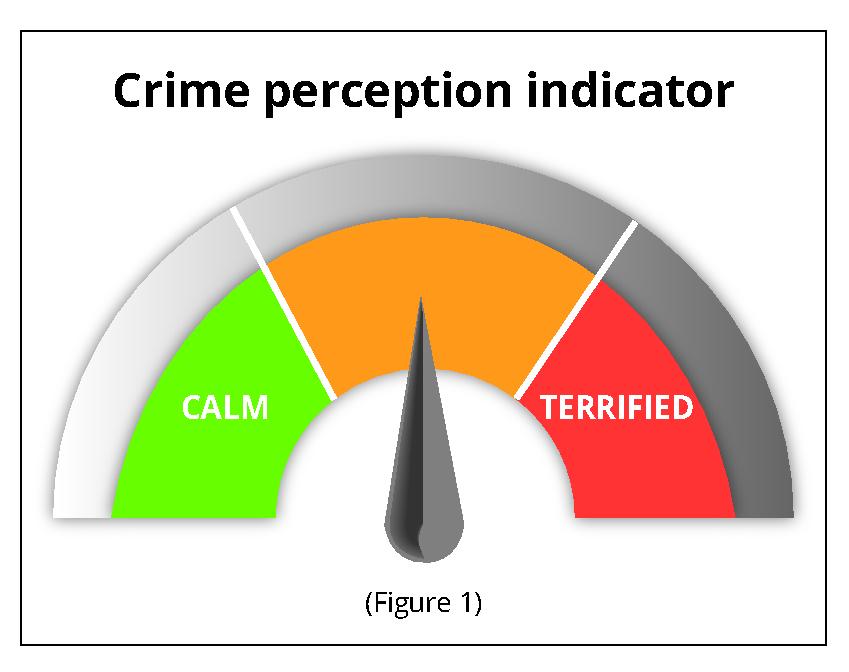 I have been bombarded with questions such as: “Why is it that when I am in London I feel safe, but not when I am in downtown Kuala Lumpur?”

So why do we feel safe in a foreign city and not in our own?

First, let me clarify the confusion regarding reality versus perception. There are actually two pictures and two views on each picture.

Regardless of the different views, our aim is to further reduce crime and manage the fear of crime.

There is a gap between the reality of crime and public perception. Recorded crime has gone down but nine out of 10 people surveyed believe crime has gone up or remained constant.

The authority believes that if the crime index goes down, then the fear of crime should go down too.

The public, on the other hand, looks at the matter differently as they come from the platform of “fear of crime” and cannot reconcile the reduction of crime, as shown by the crime index, with their own fear of crime.

Hence the second picture – the fear of crime, which is also divided into the public’s view and the authority’s view.

Research tells us that fear of crime and crime itself are not correlated. A reduction in crime does not bring down the fear of crime. Hence, we can say that the two are “distant cousins”.

Crime is the first picture with two views (authority and public), and fear of crime is the second picture, which again has two views (public and authority). 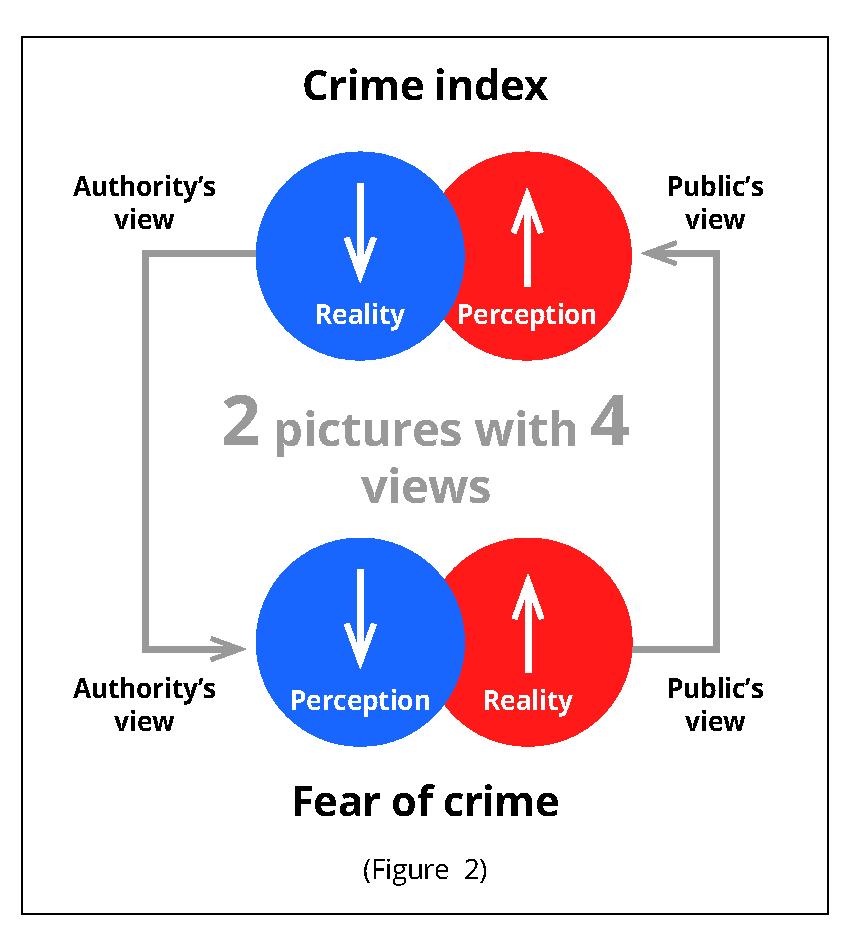 This makes communication on crime reduction a real challenge (Figure 2).

> Fear motivates us to invest time and money in defensive measures to reduce our vulnerability. We stay indoors, avoid certain places and buy extra locks for our house grilles.

We had a lab last year conducted jointly with the research team on crime and policing from the School of Social Sciences, Universiti Sains Malaysia.

The lab was attended by some NGOs and others familiar with the subject matter.

We realised that in addition to crime itself, fear of crime is influenced by four other factors: signals, my space, amplifier and police services (at the balai polis level).

Signals refer to decay or disorder at the physical and social levels.

Physical disorder is reflected in buildings that are not properly maintained, rubbish simply thrown about, poorly maintained street lighting and so on. At a glance, you can see the decay of these physical facilities.

Meanwhile, social disorder refers to anti-social behaviour such as creating graffiti, swearing, noisy behaviour and so on. It makes us uneasy to walk past them.

Is this the reason we feel comfortable walking in downtown London but not in downtown Kuala Lumpur?

It is interesting to note that the crime ratio (number of recorded crime per population of 100,000) in London is eight times higher than in Kuala Lumpur.

Our minds have been conditioned by the picture of Kuala Lumpur, whereas in London our minds see new signals which look reasonably okay.

My space refers to two dimensions. The first dimension is: Am I confident to go out? Do I have the knowledge to protect myself, for example if someone attacks me while walking to my car at the car park?

The second dimension is: Do I have the assurance that the police will come to my rescue in the event that something happens to me?

Police visibility along the streets and at residential places gives us the assurance of security.

As seen in the movie The Croods, staying inside the cave is safer.

Word of mouth, on the other hand, is double that of social media.

The general feeling among us is that social media is more contagious than traditional media, but this is not so based on our research last year. The results are consistent with research from developed countries.

The Star reported on Feb 17 that some 30 police shirts were stolen from a laundry shop. The news went viral, creating and amplifying the fear that the shirts may be misused to impersonate police officers and commit a crime. 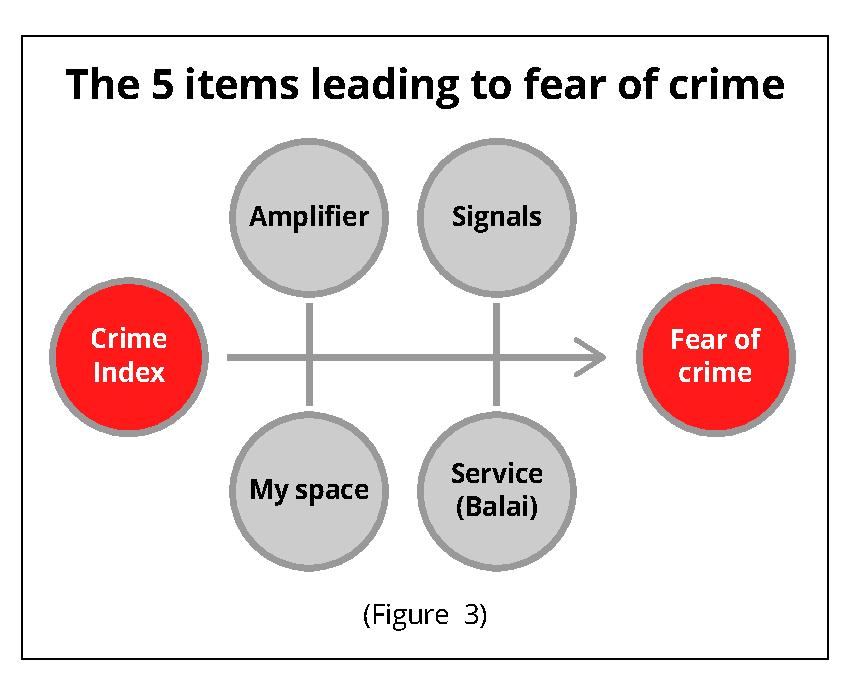 Meanwhile, police services refer to interaction quality or moments of truth between the public and police personnel.

The public expects to receive assurance, empathy and responsiveness from police personnel. Good interaction will help in building trust between the public and the police.

These four factors along with the crime itself lead to the fear of crime, as seen in Figure 3.

We are currently working on a “crime perception indicator” or CPI to measure the level of fear of crime. Once it is calibrated properly, we will publish both the crime index and the CPI.

The strategies to bring down the level of CPI will be discussed in another article.

Managing the fear of crime is indeed a challenge. Should you have any ideas, please write to me and we will bring them to our lab.

The authority cannot fight crime and the fear of crime without your support. Please join us in being “United Against Crime” and make Malaysia a safer place for all.

> Datuk Dr Amin Khan is Director of Pemandu’s Reducing Crime NKRA. He can be reached at aminkhan@pemandu.gov.my. The views expressed here are entirely his own. A short video on the different views of crime is available at