He said this was to cover the cost of daily wages, medical fees and the cost of paying another employee to finish the work of a sick worker.

He added that generally, the cost of Malaysian workers taking medical certificates (MCs) and the loss to the employers could be quite staggering.

“Wages and bonuses are paid based on company profits so if the cost for the employers is escalating through MCs and other means, then obviously the benefits will be lower for the employees,” he told The Star.

Shamsuddin said employers are also worried as the Employment Act 1955 provides that employees with longer years of service are entitled to more sick leave.

“Also, if there are a high number of claims made by a particular company in a year, there is a tendency for the insurance premium to cost more the following year,” he said.

Realising this, Shamsuddin said that some companies have introduced incentive schemes by rewarding employees who do not utilise their sick leave.

“Since introducing it, the number of annual sick leave fell from 4% to 0.01% so the companies got a lot more man-hour days.

“I also know of some companies that actually use the number of days of sick leave, among other factors, taken to determine the bonus paid to the employee.

Shamsuddin said the number of employees who were at risk for non-communicable diseases (NCD) such as obesity, diabetes, high blood pressure and cholesterol based on the survey by Socso was alarming.

He said this could be due to the lifestyle of employees, thus there was a need for them to change their mindset and way of living.

However, Shamsuddin said employers should also create more awareness among their employees to promote healthier lifestyles.

“Employees should respond positively as it will only benefit them personally.

“In the long run, the company and economy will also benefit from such measures,” he added.

Half found with health risks

Too caught up with work to save kidney from disease 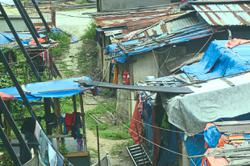