Hishammuddin accompanied by Tea Banh inspecting the guard of honour upon arrival at the Ministry of National Defence, Phnom Penh, Cambodia.

PETALING JAYA: Cambodia has agreed to support Malaysia's proposed establishment of an Asean Peacekeeping Force, comprising of personnel from all 10 Asean member states to serve the United Nations.

Defence Minister Datuk Seri Hishammuddin Tun Hussein said this following the signing of a Letter of Intent between both countries to strengthen bilateral cooperation on defence cooperation during his visit to Phnom Penh Monday.

"I met with HE General Tea Banh, Deputy Prime Minister and Minister of National Defence for the Kingdom of Cambodia and he has highlighted to me Cambodia’s potential contribution for the peacekeeping force in clearing landmines," he said in a statement. 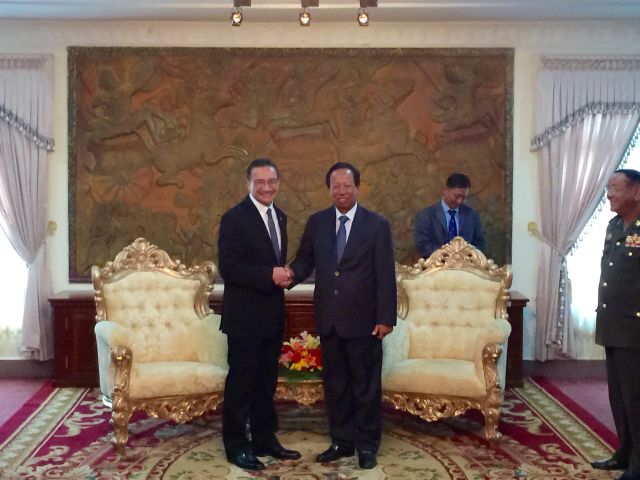 Hishammuddin (left) and Tea Banh before their bilateral meeting at the Ministry of National Defence, Phnom Penh, Cambodia.

Hishammuddin said the signing of the Letter of Intent includes increasing military training and exercises, exchange of personnel, information sharing and use of facilities.

"We hope that this will lead to a Memorandum of Understanding (MOU) signing in the near future," he said.

Hishammuddin said during the meeting with Banh, he had also discussed on Cambodia's participation in the Malaysia Defence Cooperation Programme (MDCP) and the Humanitarian Assistance and Disaster Relief (HADR) efforts by both countries in the region. Hishammuddin (left) and Tea Banh signing the Letter of Intent to boost bilateral relations and defence cooperation between the Malaysia and Cambodia.

"I also took this opportunity to personally invite HE General Tea Banh to both the 9th Asean Defence Ministers’ Meeting and the 2015 Langkawi International Maritime and Aerospace Exhibition next month," he said.

He added that both countries would establish a committee to ensure materialisation of continuous and effective defence cooperation between both parties.

Hishammuddin said that he would be continuing his series of official visits to every Asean country by travelling to Laos on Tuesday.