PETALING JAYA: The police crackdown on Islamic State (IS) militants here has dealt a blow to the terror group’s use of Malaysia as a transit point for recruits headed to Syria to join its ranks.

A recruiter in Syria for the militant group just posted a warning on the IS website urging Indonesians not to transit in Malaysia, saying that to do so would be suicidal.

Using the name Abu Hud, he said that many Indonesians who transited the country in recent months had been arrested before they could reach their destination.

Deputy Inspector-General of Police Datuk Seri Noor Rashid Ibrahim said that while the counter-terrorism division hunted Malaysians trying to join IS, it kept an eye out for IS recruits of other nationalities.

“We are glad our efforts are showing results and are preventing militants from joining IS through Malaysia.

“We will continue our vigilance at all exit and entry points to ensure no one slips through our net,” he told The Star yesterday.

The police have repeatedly said that they will not allow Malaysia to be a hideout, base or transit point for terrorists and militants.

With Malaysia no longer a viable option, sources have told The Star that the militants would probably switch to alternate routes such as via Brunei, Hong Kong, China and some European countries to get to Turkey and then Syria.

“The authorities discovered that Brunei was one alternative route used by Malaysian militants following an arrest last month.

“It is possible that Indonesian militants may be using the same route as well,” a source said.

Attempts have also been made to fly to Saudi Arabia on the pretext of performing the Umrah and to Jordan before securing passage to IS-controlled territories, according to the sources.

However, another source called for caution, saying that the warning on the IS website could be a ruse to throw the authorities off guard.

Comm Noor Rashid said Bukit Aman was working with the intelligence organisations of neighbouring countries to further enhance its security capabilities and effectiveness.

Last month, 12 Indonesians — including five children — were arrested in Selangor during a large-scale operation. They were planning to fly from KLIA to Turkey and then to Syria.

IS recruiter: Transit in Malaysia akin to suicide

Hisham: Not fair to run down anti-terrorism Bill now 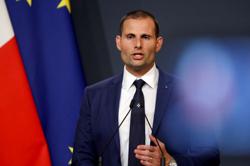