KOTA BARU: Authorities said the floods in Kelantan are the worst of the past decade after rain fell continuously for more than 12 hours Saturday, swelling the number of flood victims at relief centres state-wide to almost 20,000.

"I was told this is the worst flood season over a ten year period. Luckily the authorities are ready to serve the 20,000 people seeking refuge at the relief centers" said Local Government, Housing, Health and Environment Committee chairman Datuk Abdul Fattah Mahmood.

Heavy rain that started at 3am on Saturday worsened the flood situation.

The official Kelantan flood portal at ebanjir.kelantan.gov.my reported that Pasir Mas, especially Rantau Panjang town, had been crippled by floods since Wednesday.

Abdul Fattah said although there were 4,336 people from the various agencies on the ground assisting flood victims, there were a few grouses regarding the supply of food and other amenities.

He added that the authorities were doing their best to help the victims.

"There is enough food for flood victims but there have been complaints where food was slow to reach the victims.

"I have not seen so many evacuees at centres before, and food had to be airlifted to and dropped off at inaccessible areas.

"This situation is far from over as there will be continuous rain next week," he said. 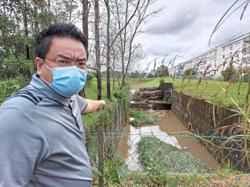