RCI report: Illegals to face the brunt of the law

The Attorney-General said those who used false supporting documents to get Malaysian birth certificates and identity cards through syndicates which had links to the National Registration Department (NRD) would face the brunt of the law.

“Some used statutory documents signed by the ketua kampung to get genuine Malaysian documents and they will face action,” Abdul Gani said.

The task of identifying this group of people would be left to the working committee on foreigners (chaired by Deputy Chief Minister Tan Sri Joseph Pairin Kitingan) which will also make recommendations to the permanent secretariat on foreigners in Sabah, jointly chaired by the Home Minister and Chief Minister, he added. 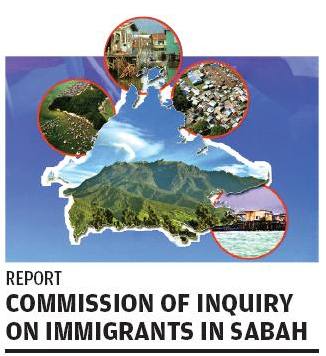 Abdul Gani noted that it was illegal for anyone to obtain Malaysian citizenship via false documentation and action could be taken against them even if the cases were two or three decades old.

Earlier, Chief Secretary to the Government Tan Sri Ali Hamsa said the authorities had in 1995 acted against members of the syndicate including arresting several former NRD directors who served in Sabah.

He said the foreigners had bought the Malay­sian identity cards from individuals and syndicates with links to the Sabah NRD officers.

“It (providing identity cards) was done by syndicates or individuals for monetary gains. There was no political motive,” he said, adding that the so-call Project IC was carried out by syndicates.

During the inquiry, several witnesses claimed that thousands of identity cards were given to illegal immigrants who later became voters while policemen investigating the cases testified that it was done for monetary gains.

Asked if the status of previous elections was now in doubt because the electoral rolls were riddled with non-citizens, Abdul Gani said the rolls were continuously cleaned up by the Election Commission.

He noted that some 78,340 names were deleted from the rolls over the years, adding that the numbers did not affect the outcome of the elections.