Husam: Right of non-Muslims to consume alcohol, even in Kelantan

PETALING JAYA: It is the right of non-Muslims to consume alcohol, and they are allowed to do so even in PAS-ruled Kelantan, said the party’s vice-president Datuk Husam Musa (pic) at a forum on Monday night.

“Alcohol is the right and asset of the non-Muslims. We cannot forcefully take away the assets of non-Muslims without their consent,” he said.

Husam explained that in Kelantan, licences are granted by the state government to non-Muslims to sell alcohol but the proceeds from it are channelled separately from other taxes so that Muslims do not profit from the sale of alcohol.

He was speaking on the issue of a memorandum sent to national carrier MAS by certain factions within the Islamist party, including Pasir Mas MP Nik Mohamad Abduh Nik Abdul Aziz, which sought to ban the serving of liquor on board flights.

“Are non-Muslim passengers not accorded the same rights as the people of Kelantan?” asked Husam, who stressed that it was “manageable” to arrange for Muslims stewardesses not to serve alcohol. 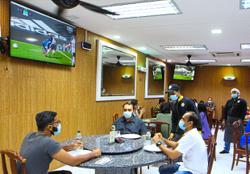