Three killed in Sarawak mine explosion

X: Fire and Rescue Department forensic personnel inspecting the coal mine area after the explosion. — ZULAZHAR SHEBLEE / The Star

KUCHING: A gas explosion in a coal mine in Selantik, Pantu, Sri Aman, about 130km here, killed three foreign workers and injured 24 others.

The dead were a North Korean, an Indonesian and a Myanmar national. Details of their identities were not revealed.

Sri Aman police chief DSP Mat Jusoh Mohamad said the gas fire ignited at about 450m below the tunnel’s entrance at 8.45am yesterday.

“Twenty-four of the 27 workers inside the tunnel scrambled out and helped those who were injured,” he said. Most of the injured were taken to the Sri Aman Hospital, where the bodies of the three deceased were also sent for a post-mortem.

The others were taken to the Serian Hospital and the Pantu clinic. Six of the seriously injured were later brought to the Sarawak General Hospital here.

“According to the supervisor, the blast occurred when the workers were just about to start work,” he said.

“We are also waiting for the mine engineer to give us assurance on the internal structure (of the tunnel) and whether it is safe or not for us to enter,” said Moos. 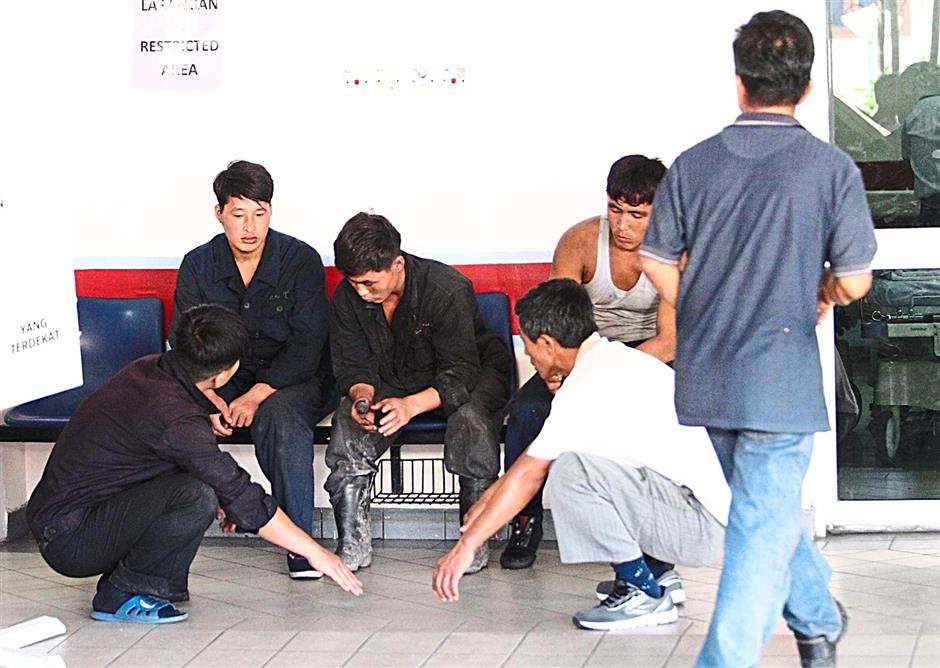 Race against time: An injured mine worker arriving at Sarawak General Hospital for treatment.

“It looks like the tunnel is quite cramped. We really have no idea how it is inside but usually if there is an explosion, the structure will change,” he added.

Moos said the three workers died inside the tunnel but were not killed instantly.

“They were badly burnt in their faces by the ‘flash over’ and could move towards the exit,” he said.

“The others, some with serious injuries and some lightly injured, managed to run out.”