Michelle Yeoh: Jean Todt is my significant other, but we have yet to marry

IPOH:  Internationally acclaimed movie star Tan Sri Michelle Yeoh has not yet married her fiancé Datuk Jean Todt although they regard each as their significant other.

Confirming that they had yet to tie the knot, Michelle said she and Todt have not found the right time to marry.

"Many events have taken place in our lives in recent years and we have not been able to find an appropriate time.

"We will certainly not get married secretly, we will publicly announce it," she assured reporters who met her at her late father, Datuk Yeoh Kian Teik's wake here on Thurday.

Yeoh's marital status has once again come into question among the media after the International Automobile Federation (FIA) president's name appeared as her spouse in obituaries carried in various media.

"Although we are not officially married, we have been together for so many years.

"He and I are regarded as each other's respective significant other in our families," she said.

On whether her friends in the entertainment circle would be attending her father's funeral on Sunday, Michelle said:

"I have not asked them to come because I understand that they are busy people, working in different places and all.

"I am, nevertheless, grateful for the messages they have sent me."

A former MCA vice-president, state adviser and chairman, Kian Teik passed away at the age of 89 on Wednesday. 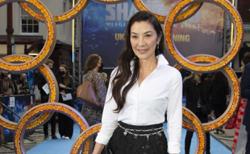