THE concluding address by PAS president Datuk Seri Abdul Hadi Awang at the end of the party’s 60th muktamar in Batu Pahat left no doubt that the gulf between the party and its partners in Pakatan Rakyat has turned into a major rift.

“It’s an early indication of a parting of ways,” said a PKR political bureau member who declined to be named.

“We should assuage the hurt in PAS and make room for the party to contextualise issues (in Pakatan) the Islamic way,” he said.

He added that the unhappiness in PAS has turned into open defiance, and urged top leaders in PKR and DAP to study Hadi’s speech and take immediate steps to close ranks.

“I am surprised at such an open display of bitterness,” said the PKR man, asking how could there be forgiveness and forgetting now after such defiance.

He added that the bitterness, as expressed by the PAS leader, must have been a long time in the making.

Hadi spilled out his bitterness, without hesitation, with Pakatan and the group’s de facto leader Datuk Seri Anwar Ibrahim. He merely called a spade a spade.

The “Anwarists” in PAS came in for much booing and heckling but some bravely carried on.

What Hadi left unanswered, amid the sound and fury that poured out of him, was how Pakatan’s final moments would play out.

The PAS president also spelled out the differences between his party, which seeks to do things the Islamic way, and its partners, who are either secular or socialistic.

Hadi said they treat PAS as a hotel, where they eat, sleep and then go their own way.

He fell back on rustic rural imagery to describe how PAS is used as a bridge to cross a river, and after crossing, they disappear into the jungle.

In a telling passage that showed his bitterness with Anwar, Hadi said to thunderous applause: “They could not get what they wanted, so they stole our assemblymen; they bought them.

“There were brokers and there were also pimps.”

What the assembly showed was that Hadi and the ulama have reasserted themselves and pushed the Anwarists into a corner.

They established that PAS is ruled by the ulama and in the way of Islam, not by secular laws and norms. This was seen in the support for Hadi for overruling a central committee decision to support Dr Wan Azizah as the sole candidate for the mentri besar post.

PAS is of two minds about accepting one of its own as mentri besar as they understand it is the PKR’s place to nominate candidates for the post.

The new mentri besar is due to be sworn in tomorrow but there is little indication who it will be except that it is not likely to be Dr Wan Azizah.

The mentri besar crisis has radically changed the Pakatan political landscape and called into question the coalition’s ability to cooperate for the benefit of the rakyat.

Can Pakatan build on a proven consensus the way Barisan Nasional (and the Alliance before it) was able to for over six decades?

All the compromises contained in its Buku Jingga and common policy framework have been shot to pieces with PAS reasserting itself and its Islamic credentials.

Hadi’s final words on cooperation in Pakatan are a clear indicator of his desire to rewrite the charter.

“PAS will still cooperate with Pakatan for as long as Islamic principles are not contravened,” he said using Islam as the only qualifier and that otherwise, it is a parting of ways.

The ultimatum, couched in Islamic terms, leaves Anwar little choice but to return to the drawing board to redo the spirit of cooperation that once existed in Pakatan and let PAS take the lead.

But then, Anwar is seen as the glue that holds together the Islamic PAS and the secular DAP.

Without his firm hand in managing the alliance, PAS tends to gravitate to its Islamic ways and DAP to its secular ways. 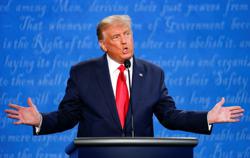