A MAN’S favourite traditional coffee became the cause of his death after he insisted on taking it, despite knowing that the product was a banned item in Malaysia.

Harian Metro reported that the 36-year-old man died at about 4am last Sunday after drinking the coffee that he bought from a shop in Subang for RM5.

His wife, known only as Ella, 31, said she recently read about a ban on the coffee brand and told her husband about it when he asked for his usual fix.

“He knew it was dangerous. But, he did not listen to me and forced me to make the coffee.

“Two hours later, he complained of headache, breathing difficulties and chest pain. He also vomited many times and began sweating,” she said.

Earlier that day, he had shown no sign of illness and had even taken Ella and their two children out for dinner.

On Sept 4, the daily reported that 17 traditional blended coffee brands were banned by the Health Ministry for containing sildenafil and tadanafil, which are often claimed to be able to increase sexual performance.

Ella said that after drinking the coffee, her husband asked her to apply ointment on his chest and head but his condition worsened.

“I called for an ambulance. Howe­ver, my husband was pronounced dead by the paramedics,” she said.

The ministry’s pharmaceutical services division deputy director (enforcement) Mazlan Ismail said the coffee had been banned since early this year.

> Kosmo! reported that a pupil who was enjoying her favourite biscuits at home in Selayang almost swallowed a needle lodged in one of the biscuits.

“As I was eating (it), I felt something sharp and hard inside my mouth. I pulled it out and discovered it was a needle, about 2cm long,” said Nur Ain Afrina Mohd Anis, 11.

She said she had previously eaten the biscuits manufactured by an established company but found nothing wrong with them.

Her father Mohd Anis Mohd Daiman said the needle appeared to be broken, adding that he had contacted the company to lodge a complaint. 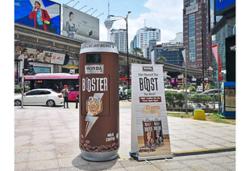