A hotel that shouts ‘Merdeka!’

A view of Federal Hotel from the street of Bukit Bintang today.

Federal Hotel stands tall today as part of Malaysia’s illustrious history as it helped usher in the country’s independence.

CHANCES are you probably won’t give Federal Hotel a second glance when driving down the bustling street of Bukit Bintang these days. The rather dated architecture is drowned by the neighbouring modern skyscrapers that populate Kuala Lumpur’s famous entertainment district.

However, the building’s unassuming facade betrays a rich historical trail. Completed three days shy of the country’s independence in 1957, the hotel was intended by our first Prime Minister Tunku Abdul Rahman to be a world-class accommodation for the distinguished guests who would be gracing the historic celebration that marked the handover of Malaya from the British.

He persevered and the hotel was completed in time for the historic Merdeka Day. The feat even impressed Tun Abdul Razak Hussein and Tun H.S. Lee, who were pleasantly surprised to see completely uniformed staff during an inspection tour of the place.

“I have a feeling that this hotel, which adorns the capital of the Federation, will be the meeting place as well as the resting place of visitors of all nationalities from all parts of the world,” said Tunku when Federal Hotel finally opened its doors on Aug 28, 1957.

A Chinese dim sum party was hosted following the opening ceremony of the hotel. Attended by over 2,000 guests, it was touted as one of the largest receptions held in the country at that time.

The first guest to register for a stay at the hotel was British government official Nancy Simmons. Affectionately known as Bunny, she chauffeured Tunku during his official visits to negotiate Malaya’s independence in London.

As the country’s VIP guest and Tunku’s good friend, Bunny reportedly said that her presence signified the well wishes of Britain’s working class to the newly independent Malaya. 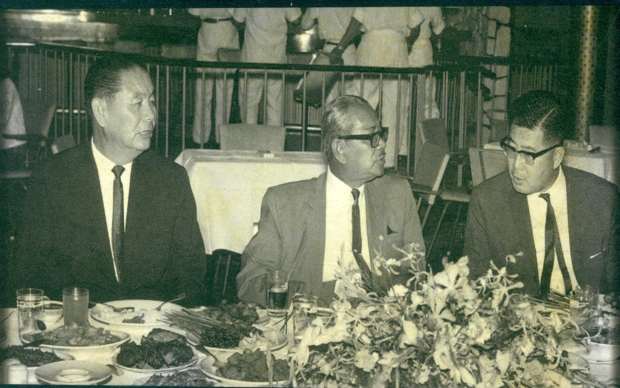 Federal Hotel’s second guest was Tan Sri Yahaya Ibrahim, who at that time had been assigned as a protocol officer for a delegation representing the Japanese government.

By Aug 31, all 90 rooms in the hotel were fully occupied, securing its status as the hotel of that period. According to the hotel’s records, the government occupied the hotel for a week and chalked up a bill that amounted to RM63,000.

At the time of its opening, the hotel’s staff comprised four telephone operators, nine clerks, 35 maids, 12 housemen, 15 room boys, 35 dining room boys and eight bar boys. In addition, 22 cooks – of whom 15 specialised in Chinese cuisine and the rest in Western food – catered to the guests’ gastronomical palate.

Nancy Huang, who joined the hotel as a receptionist 10 years after its opening at the age of 18, recalls the hotel being a popular entertainment hub in its heyday. She adds that being in close proximity to BB Plaza, a popular haunt among tourists, made Federal Hotel the destination of choice for holidaygoers to Kuala Lumpur.

The hotel monopolised the city’s nightlife in the past, providing both international and local entertainment acts.

“Those days, we had two venues – a nightclub on the fifteenth floor and the Mandarin Palace – that hosted regional and international acts.

“There were floor shows with dancers and singers from Taiwan at both places,” says Huang.

If anything, the Mandarin Palace – with its opulent interior featuring intricate wood carvings of Chinese characters and fables evoking a palatial ambience – was one of Kuala Lumpur’s most iconic restaurants at the time.

Mandarin Palace was even immortalised on the silver screen when it was featured in The Seventh Dawn, a 1964 movie starring William Holden, Capucine, Susannah York, Michael Goodliffe and Tetsura Tamba.

Based on Michael Keon’s novel The Durian Tree, the film which was set in the Malayan Emergency details the political conflict among World War II adversaries. Throughout the years, the hotel has had its fair share of prominent guests. Among them were former Australian Prime Minister Sir Robert Menzies and Sir Malcolm MacDonald.

The former was part of the delegation that drafted the Federation of Malaysia, which was inaugurated on Feb 1, 1948. Other famous guests were Pulitzer Prize winner James A. Michener and former world heavyweight boxing champion Muhammad Ali.

Huang, who is now Federal Hotel’s room division manager, notes that the hotel has undergone many renovations since its inception.

When the formation of Malaysia (which incorporated Singapore, Sabah, and Sarawak) was announced by Tunku in 1962, Federal Hotel was in the midst of building a 21-storey extension behind the original structure.

Helmed by Japanese architect Yozoshipata, the renovation was completed the next year with a revolving restaurant on the 18th floor. Today, the hotel boasts 450 rooms and suites – a stark contrast from its humble beginnings of only 90 rooms.

Despite its modern refurbishment, Huang says that the hotel will always be proud of its illustrious historical roots as that is what makes it a landmark in the bustling metropolitan.

One for the country

History collides at the Coliseum