IPOH: A teenager who ran away from home four times in the past two months has not come back since going missing with two laptops and an ATM card last Saturday.

Her mother said that in the past, P. Nandhini (pic), 16, would always show up at their home in Kampung Tersusun Jelapang Jaya a few days after going missing.

“But she has not returned home since running away with the laptops and ATM card. She did not take any luggage with her.

“We can still contact her on her mobile phone but she refuses to pick up our calls except for the one time when another woman answered.

“She introduced herself as Lavanya and directed us to call my daughter at another number,” said S. Marimuthu, 54, during a press conference at the Perak MCA headquarters here yesterday.

Marimuthu, who works as a nurse, said the woman also gave her an address in Johor Baru to find her youngest child. However, both the leads led to nowhere.

The police, said Marimuthu, failed to find her daughter or the person who claimed to be Lavanya at the address.

“I later found out that the mobile phone number is registered to a different person. The address to which the phone was registered under turned out to be that of a Chinese restaurant,” she said, adding that both she and her husband had since received messages and calls from various phone numbers. 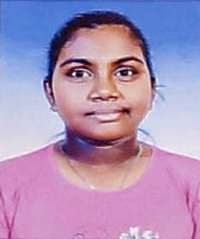 Marimuthu said her daughter had been acting strangely after getting a mobile phone.

“I have no idea where she got the phone from as my husband and I did not buy it for her. Her grades also started deteriorating after that,” she said.

State MCA Public Services and Complaints bureau chief Jimmy Loh urged those who had seen Nandhini or know of her whereabouts to call Marimuthu at 016-625 8088 or Perak MCA at 05-253 6981.