KUALA LUMPUR: Barisan Nasional Youth leaders and members have handed memorandums to the United Nations, Russian Embassy and Ukraine Embassy on the downing of MH17.

“The culprits must be brought to justice swiftly. The Russian and Ukrainian governments must give us full support in allowing the investigation teams full access to the crash site,” he told reporters outside the Russian embassy yesterday. He said the group wanted to hand the memorandum to Russian ambassador to Malaysia Lyudmila G. Vorobyeva but she was not available, so a representative came to see them instead. Khairul Azwan said he did not want to assign blame to Russia or Ukraine but a thorough and independent investigation must be held.

Bangsar MCA Youth branch chief Chris Wong said they were not accusing any party but to seek justice.

“We need to bring a closure to this.”

The memorandum called upon the Putin ad­­ministration to exercise its influence over the separatists in Donetsk to ensure the integrity of the crash site, treat all victims and their possessions with dignity and cooperate with independent international investigators by sharing all information and intelligence. 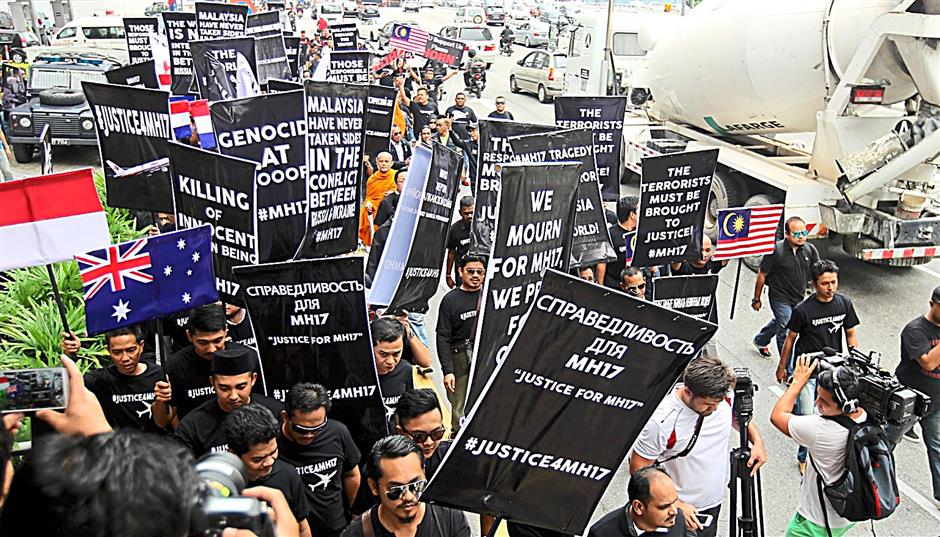 The group marching to the Ukraine Embassy during a rally in Kuala Lumpur.

PAS Youth chief Suhaizan Kaiat, who praised the Malaysian Government’s handling of the situation, said they wanted the UN to play a leading part in the investigation.

“As Ukraine and Russia are now at odds with each other, we feel that a neutral body such as the UN or an independent international body should be responsible for the investigation.

“We are disappointed with how the crash site had been handled so far as it had been tampered with apparently,” he said.