JOHOR BARU: A resident affected by the Refinery and Petrochemicals Integrated Development (Rapid) project in Pengerang, about 110km from here, has failed in his bid to file an injunction to put off the digging and relocation of his ancestors’ graves.

The High Court rejected the claim by Lim Goo Kia on the grounds that Section 29 of the Government Proceeding Act provides for the court not to grant an injunction or make an order for specific performance.

“Now that the injunction has been rejected, the grave digging and relocation works for Lim’s ancestors’ graves would start at any time soon,” Puah said, adding that he would discuss with his client if he wanted to file an appeal as it had to be done within the next 30 days.

Puah said the injunction was filed to put on hold the grave digging and relocation of the graves at the Pengerang Chinese cemetery.

“Lim wanted digging work to be delayed until the start of the hearing for the main case, which is to oppose the state government’s decision to relocate the graves,” said Puah.

It was reported that four Chinese cemeteries at the Rapid site would be shifted to Bukit Gelugor to make way for the petroleum complex project.

Relocation works on 1,542 graves had been carried out since April 18. 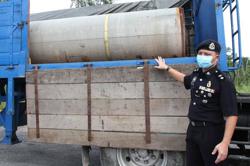 Six nabbed over construction theft worth RM700K in Johor, seven still at large